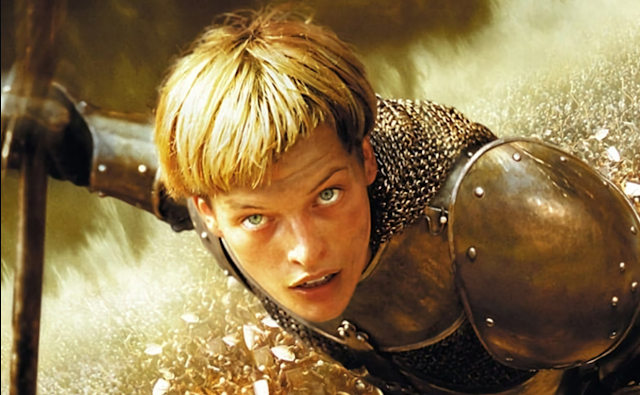 I’m not calling it by its full name, because it’s longer than needs be. From now on this film will be referred to as simply Joan of Arc. I reckon you’re smart enough to keep hold of what I’m on about, you’re clever, read more of my reviews you see what I’m doing...

You might have noticed that of the main cast only a handful are natural French speakers. Joan of Arc is in English but with “French” accents. These accents are not always convincing. Obviously Cassel nails it, but he’s brilliant, a totally convincing Gallic affect. Some don’t even try, which I’m not sure is better or worse. English as French and an American Jewish man as God, Joan of Arc is certainly inclusive.

How much of Joan of Arc is accurate to (accepted) history I don’t know or care, it’s a frigging film and thus entertainment. I’ll tell you what is fact, not very attractive director Luc Besson was in a relationship with star Milla Jovovich, a beautiful woman sixteen years his junior. I’m not judging*, but it is a fact. Also a fact is very recently I reviewed Death Race, directed by Jovovich's now husband Paul W.S. Anderson. 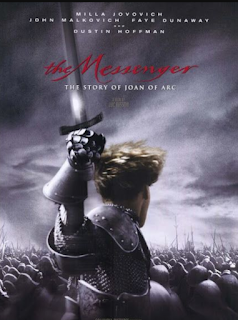 There is a  scene where Joan’s “innocence” is checked and it might well be one of the weirdest, most uncomfortable things I’ve seen this year. This is not my first viewing of Joan of Arc and I think I must have blocked that bit from my memory like a traumatic event from my adolescence. I’d make a funny joke about what exactly I’ve blocked from my withering grey matter, but it’s gone, so use your imagination.

Despite its scope and decent, enjoyably brutal action, in places Joan of Arc’s budget is a bit exposed. That can be forgiven, in my eyes- it is not a Hollywood production. Joan of Arc does boast some breathtaking, occasionally very subtle, cinematography. It also has a sense of humour, something I always like in more dramatic and serious films when done well. Braveheart has some standout hilarity.

I had a desire to read more into history while watching Joan of Arc. The uproarious The Death of Stalin also had this effect on me and I bought a book on the actual, real life and not very funny, Joseph Stalin. It was really interesting for the first 100 pages until I got a smartphone and just watched Netflix on the train.

There is a very, deeply, horrifying conclusion to the film which really does its job at upsetting you. I won’t spoil it in case you literally have never read a book.

The film finishes on a sad reflection on how man uses the idea of God, real or not, as a tool for us mere mortals to affect other mere mortals. Sometimes not for the good. Joan of Arc is a wonderful, often beautiful, mostly thrilling epic with a soul, despite some fiscal shortcomings. 8/10
*Besson also has a litany of #MeToo allegations