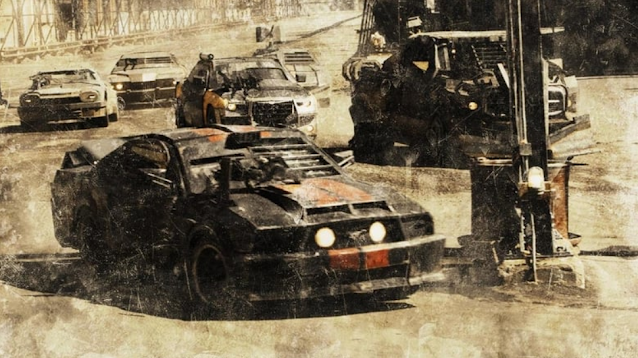 I’m not saying you have to be drunk to watch Death Race, but after what seemed like hours trying to get my phone and beaming device to talk I certainly was. I was determined to watch Death Race on the projector to take in the full carnage of (much lamented director) Paul W.S. Anderson’s beefy racing actioner. This is why I like physical media, it's easy. One day I’ll be extolling the virtues of paper, too. Talking of paper- I have four pages of notes on Death Race. Much like the cars in the film, I was well oiled.

See, this is what happens when I review a film after a few light ales and a Babycham then return to my notes some weeks or months later; I have no idea what they say. I can barely read my own, sober, handwriting, let alone when I’ve been writing half cut and in the dark.

Death Race’s plot is simple- wrongly convicted man tries to win his freedom via a televised car race between prisoners orchestrated by a corrupt prison warden. Oh, and people die in the races, not by accident like F1, entirely by design. It’s a remake of a 1975 film, but that’s really not important because this is my website and I’m telling you it’s not.

The Stath stars and is looking ripped. Although when is he not? He’s from Sydenham, Jason Statham, about a mile from me. I haven’t found out exactly where because I’m not Liam Neeson and he doesn't have my daughter. Or live there anymore. Everbland Jason Clarke also features- how he got so many big roles I don’t know. Ian McShane is Ian McShane and I love Ian McShane so yeah that’s all the cast I can be arsed mentioning. Nobody watches Death Race for high-brow acting. 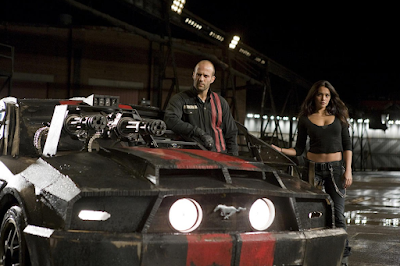 I’d call Death Race hi-octane but that’s too easy, it’s more HGH levels of testosterone spilling off the screen alongside the explosions and gore. Death Race is much more fun than F1, a sport which sounds like a shit skin cream. Although the murderous inmate population in Death Race probably has a comparable psychopath percentage to Formula 1.

There’s a lot of slo-motion boob bouncing in Death Race, which if I’m watching a film about killer car clashes, I’d prefer the high frame rate was used on decapitations and destruction, but that’s just me. Despite getting bored by too much talk of them, it turns out I do like cars, they’re like rollercoasters with no tracks and more risk of death. I was having a lot of fun, gleefully wallowing in the ridiculousness of it all.

I particularly liked the disclaimer at the end of Death Race, essentially saying don’t be a dumbass and try this at home. I mean. This is the target audience. Good thing I don’t drive because I’d have been welding spikes onto my car within minutes of the credits ending. Finally, I don’t know why I wrote “cockfingering” in my notes, but I’m going to mention it because I think the mental image deserves recognition.

Death Race is a film I watched at the absolute perfect time. The right film for the mood I was in- not one for thinking and needing violence. It’s as if someone made Carmageddon into a film, but with no sheep to splat. A perfectly needed film for me at the time. 8/10 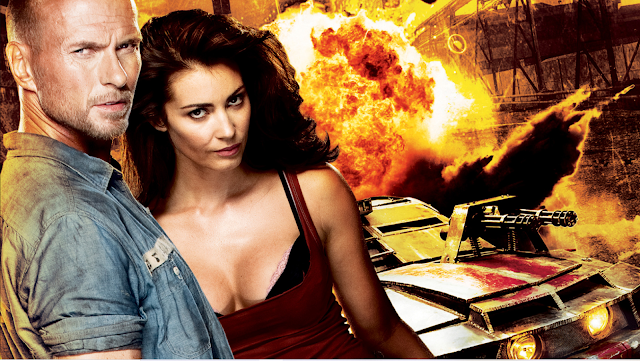 BOOM! Surprise! Yes, yes I know, you lucky people are getting two reviews for the price of one: nothing whatsoever! Don’t worry I’ll be quick*.

Because I don’t drive and so couldn’t go out immediately on the South Circular burning rubber high on the excitement of watching Death Race, I put on the sequel right afterwards. I’m so impressionable.

The Stath is swapped for The Goss (Luke), Sean Bean crops up and Death Race 2 is actually a prequel and an origin story for one of the first film’s characters. It basically has the same plot, you'll be surprised to hear. Ving Rhames also appears and Patrick Lyster as the warden may as well wear a T-Shirt saying “Bob Gunter wasn’t available”. Lauren Cohan (Maggie) is also in it!

Death Race 2 is noticeably lower budget, which is to be expected really. There’s a lot of slo-mo boobage again but they do mix it up with quite a lot of Luke Goss’s sweaty, bobbing man-ass. I kid you not.

Sadly the sequel/prequel is light on the gore for what it is and features some annoyingly obvious CGI explosions. It is functional but nothing more. I decided against watching the third Death Race at all, let alone immediately.

Although I wasn’t offended by Death Race 2 and the sweaty, bobbing man-ass I happily sat through it. It’s hard to make an argument for scoring it any higher than 5/10 and that score is almost certainly higher than if I’d watched the film cold, not still buzzing after its predecessor.

*Name of my sex tape.