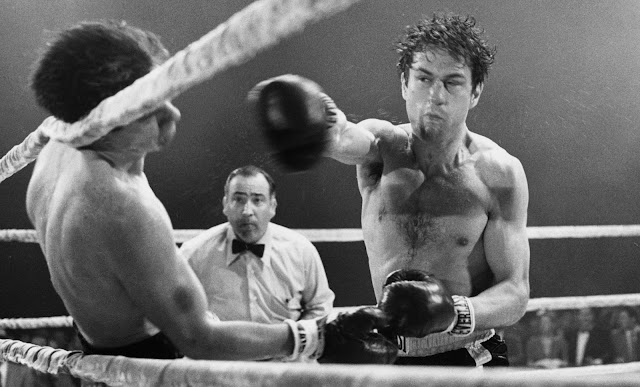 Raging Bull (1980)
Spoiler Free
Drama/ Sport/ Biography/ Violent
Rated 18
This is the final review in the Bedsit Cinema Maximum Violence Season
Check out the others!
A HISTORY OF VIOLENCE INSIDE DIRTY HARRY: THE FULL SERIES
POSSESSOR
THE WILD BUNCH
HOME ALONE 2: LOST IN NEW YORK

Raging Bull syndrome is something I’ve long referred to on Bedsit Cinema. It’s a term I use to describe a film which I know is good, but I cannot get on with for whatever reasons. Reasons which vary film to film.

I also have a personal Raging Bull story, which is unrelated to my opinion on the film. Some (a lot of) years ago I was on a talk show hosted by Justin Lee Cuntface. Boxer and at the time World Champion Amir Khan was a guest and I’d submitted a question to ask him. I was picked to go on the show and ask him my question. Only they didn’t let me ask him my question, I was given a very distasteful, sex question and I later found out, my one was given to the host who didn’t even fucking use it.

Wanting to be on TV and all, I modified my approach knowing Amir’s faith, but only slightly. Not enough that Amir still got justifiably annoyed and, I hope jokingly, offered me out. There were cameras, about 300 people in the room including my then girlfriend and I said “have you never gone Raging Bull and used the iced water approach”. Lee Cuntface claimed LaMotta doesn’t do the ice water thing, I said yes he does and Cuntface said “that’s Raging Bull-shit!” and I got mocked and it doesn’t hurt all these years later I promise.

Anyway, in-between takes I explained to Amir I’d been stitched up, he was a total gent about it, we talked in the green room afterwards and I still love Amir a lot. Justin I’d still happily punch in the face.

This is all a nice segue into the Raging Bull review for two reasons, the syndrome I mentioned earlier and I’ll say upfront that like Justin, Robert De Niro’s legendary boxer Jake La Motta is an arsehole to women of the highest order. He’s an arsehole to everyone, in fact.

Despite having seen Raging Bull several times before I was instantly wowed by the stunning cinematography. It is beautiful to look at. Unique. Historically, for a boxing fan, Raging Bull is an interesting insight into one of the most blighted but brilliant periods of the sport. It is perfectly acted. Not a single noticeable “performance”. De Niro grounds La Motta in what could have been (a la Pacino in Scarface) a ham-fest. Perhaps that’s part of why I recoil at the man so much, because he is not obviously an actor playing a part.

Raging Bull is a conflict, a dichotomy. A beautiful, brilliant film that’s also awful. I hate Jake LaMotta but I love the boxing scenes. It’s an issue that’s still relevant- can you get over a celebrity being awful in real life when it has no relation to why you enjoy their talent? Unfortunately in Raging Bull they’re intertwined and you have to see both.

Scorsese was faced with a challenge: how do you make a wife beating, narcissist your main character in a film, with not one iota of humour or challenge to his behaviour outside of everyone he beats up. You can’t. You just make sure the film looks good and is well acted. I don’t like the (admittedly fictional) film Scarface for the same reason I have issues with Raging Bull. But then I do also hate Brian De Palma’s film making. I’m sure he’s a lovely bloke. 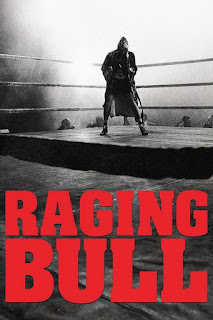 At one point LaMotta says “I’ve done a lot of bad things, Joey. Who knows, maybe it's coming back to me.”. Jake La Motta lived to 95, always sporting a trophy wife and was a cult hero to the end. As karma goes, it’s hardly swift and harsh. In the film he’s rapey-er than a Sean Connery 007.

Let’s finish well, on the highs of Raging Bull. Sort of.

The fight scenes are unrivalled, I genuinely can’t think of better cinematic combat. Rocky and Warrior have you rooting for a fighter, Ranging Bull hits you so hard the air is ripped from your lungs. Also. Joe Pesci is an astonishing actor. I know that’s an established fact but Raging Bull just reminded me. He has such range.

There are much more entertaining, in the traditional sense, fight films. They might not be as beautiful to looks at, as visceral or violent or awards worthy, but they’re more fun. Raging Bull is like being in a fight, not watching one. Once the boxing stopped, my interest dived too. I’m only here for the fight, fellas. The awfulness of the male condition, not so much.

This bullying, brutish, belligerent man was also a brilliant boxer. A bitter pill to swallow and in real life I can choke it down it but on screen I just hate him. Weird, ain’t it. Raging Bull would get such a low score if it wasn’t so fucking brilliant. It’s still overwhelmingly powerful; both its drama and the brutal boxing violence.

Belgian masculinity study Bullhead is far better than Raging Bull as far as its subtlety and not making you hate everyone, but it isn’t as good looking or exciting. Raging Bull is one of the only films I grow less fond of over time. My score is 6/10 but I still implore you to see it.