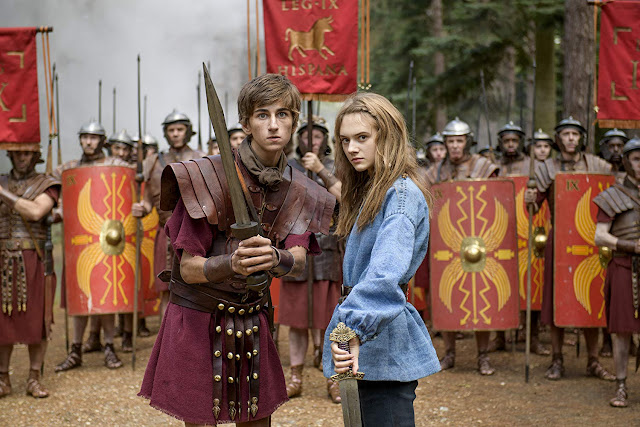 Horrible Histories: The Movie - Rotten Romans (2019) Spoiler Free
Comedy/ Family/ History
Rated PG
Amazon Prime
I haven’t reviewed a “family” (kids) film for a while, so was on the look out for one that might make for good reading. My nephew is obsessed with Horrible Histories, and I saw Horrible Histories: The Movie- Rotten Romans (which I will refer to as Rotten Romans from now on because fuck that) on Amazon Prime so thought I’d give it a go. Kids film, but not a child friendly review. I know you all love the crude jokes.
Ah the Romans, I love the Romans, and have always been fascinated by Roman society. That’s my highbrow way of saying there was lots of violence and nudity back then and I like both of those things provided it isn’t violence inflicted on my nudity. I had moderate hopes, and having never seen the TV version of Horrible Histories was essentially wandering into the unknown.
The only thing about kids films is that they are hugely spoiled by actually watching them with kids. It’s a paradox, a dilemma no doubt parents the world over face. I don’t have children and so had the joy of watching it alone, wondering what my life has come to. The first thing I noticed was that Rotten Romans has a surprisingly good cast, who I assume have been rented* in rather than being performers on the TV show.
Along with a strong line up, the humour is pretty funny. The way Rotten Romans adds contemporary references and opinions in with historical truths is very nicely done; reminiscent of what Seth MacFarlane did to the Wild West with A Million Ways to Die in the West- only suitable for children. For example, a gladiator being given instructions before a fight says,
“That whole we who are about to die thing, it really messes with my energy man.” 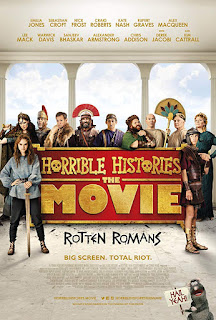 There’s an actress I recognise distantly and wonder why. Oh my God it’s Alice from Utopia! She was badass in that. Although somehow has forgotten how to act, this is upsetting and where Rotten Romans began to unravel. In fact much of the acting is stilted; I’d blame the writing but the jokes are pretty much the best part. Then the worst thing imaginable happened.
BOLLOCKS, it’s a fucking musical! I wanted to throw up; they’ve made the songs all cool in the way only your dad could. They even cast Kate Nash who I used to like. There’s raps. It’s excruciating. Let it not be said I don’t suffer to provide you with reviews for you to suffer through- this is horrible. Maybe that’s where the name comes from.
Rotten Romans is amusing, but once the singing started it was all I could do not to hide behind the sofa with earplugs in. The funny fast fades when in your head all you're worrying about is what awful song is due and when it will spontaneously ruin the narrative. However, in order to provide you, dear reader, with as comprehensive a review as possible, I had a little interval to recoup and regather.
A week later I returned to Rotten Romans, but I’m sorry, it just isn’t for me. Which is not a surprise I suppose because I hate musicals and it's a children's film. A good effort at this type of fare would manage to keep the parents at least somewhat involved too. Rotten Romans fails at this. I turned it off after an hour, but as a diligent and simultaneously incredibly lazy reviewer (told you there’s paradoxes with these films) I asked my sister and nephew who had seen it for their thoughts.
My eight year old nephew’s review: “Loved it, 10/10. The information was accurate and the songs and dancing were entertaining.
My sister’s review: “I thought it was shite.”
Bedsit it?
Your kids may like it, but as you call tell from my verbose moaning and my sister’s succinct statement (which annoyed me because I wish I was that adroit a reviewer) Rotten Romans doesn’t hit the mark for adults. Put it on for the kids, then leave the room. 2/10
*Rent a Roman! No?
Try these other reviews of kids films, some of which I didn't hate...
RETURN TO OZ
PETER RABBIT
INSIDE OUT
UNCLE BUCK
and Chris McCurtin did this great review of
MY NEIGHBOUR TOTORO
Labels: Adam Thorn Bedsit Cinema Comedy Emilia Jones Family Film review History Horrible Histories Horrible Histories Movie Kate Nash Lee Mack Musical Nick Frost Review Rotten Romans Sebastian Croft