Not only is it a brilliant, diverse pool of talent, there’s not a bad performance in there. Candy, Lemmon and Matthau were cast against their comedy backgrounds (though Candy remains hilarious). If all this stinks of someone who is in awe of JFK, correct. Although it was a long time since my last viewing, it didn't take long for me to remember how much I liked the film. If anything, almost twenty years later (estimate) and a full five years more mature, I was able to appreciate more of JFK than previously. 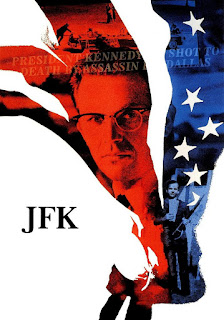 Jim Garrison and his team chase rumours of a cover up regarding the Kennedy assassination, building a case against sinister shadows to prove a plot to kill the President. Regardless of whether you buy the conspiracy - which you absolutely should, it’s more and more being revealed to have a lot of truth in it - JFK is great fun. I completely believe it is possible JFK was an inside job. Perhaps that was just the film; perhaps that’s the fun of the film.

From IMDb trivia which I love reading after I’ve seen a film,

When Oliver Stone spoke at the National Press Club about the movie, someone asked if he meant to insinuate that the government was involved in the assassinations of Martin Luther King, Jr. and Robert Kennedy, as well as JFK's. He replied with a simple one-word answer: "Yes."

Stone is a Vietnam veteran. For whatever that’s worth. 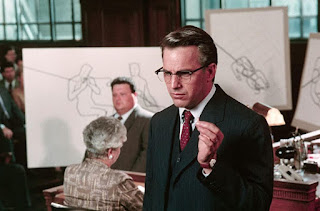 You’ve got to love the good old days where nothing was provable; like grassy knoll shooters and cigar sex** and grabbing women by the pussy and actual votes and all that stuff. How much of the film is true? You will wonder that throughout, I’m not saying you’ll agree with it or have to be a Covid denying nutjob cunt, but it doesn't matter because JFK is thrilling. It’s also fucking long so put aside a whole evening/ afternoon.

I was glued to JFK, riveted and marveling at the many, many wonderful performances and fascinating story. I even managed not to have a nap. Conspiracy theory or not, JFK is a Stone cold classic. 10/10