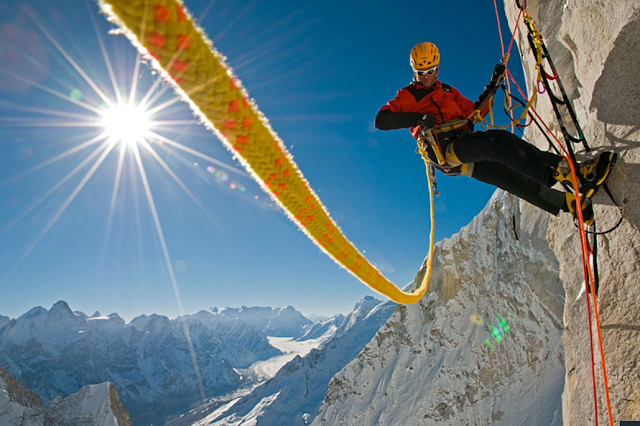 Meru Peak is 21,850 feet high. It has had, we’re told in the film, more attempts on it and more failures than any other mountain in the Himalayas. In this documentary the climbers are specifically targeting the “Shark’s Fin”, an ascent nobody has ever achieved before their attempt. Meru is described as the “anti-Everest”, because you can’t use Sherpas, there’s mixed and more difficult climbs, and you have to carry all of your gear, most of the way up.

Party lead Conrad Ankur, was the man who found George Mallory’s body on Everest in 1999. His right hand man, Jimmy Chin skied off the summit of Everest and newbie protégé Renan Ozturk is a free climbing wonderkid. Ozturk is the unknown quantity but the men explain quite clearly that if they didn’t 100% trust each other, they wouldn’t be taking that person. It isn’t hard to see why, the Shark’s Fin is a horrible proposition.

You probably won’t be surprised to hear that climbing, particularly of the sort where you’re thousands of feet up trying to do something nobody has managed before, is perilous. A deadly addiction. A wise man once said of these types of extreme sports, “he died doing what he loved. Risking his life.” It’s glib, sure, but it's bloody accurate and Meru stresses this.

For example, a Portaledge is a “hanging cot with a tent over it” I learned. Vertical camping. I wouldn’t sleep in one with two other men at 30 feet let alone at 20,000 with a drop beneath them of several hundred feet of rock. Straight down. The men stay in this up the hardest parts of the climb. The bond the three have is quite warming and honestly without it they’d not be doing it I suppose. As events stack up against them the unit is stressed as life and death decisions have to be made. 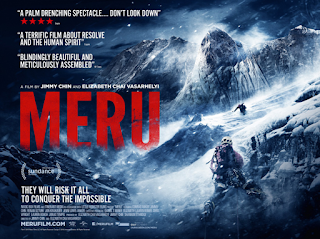 All the climbers have families, loved ones at home. They know the risks, but it’s their obsession- and to operate at the level, or indeed anywhere near the level they are, you’d have to be obsessed. Talking head interviews with the climbers, their partners and also writer/ climbing legend Jon Krakauer punctuate the climbing feats. Krakauer wrote, among many things, Eiger Dreams- a fantastic collection of essays and articles I picked up by fluke some years ago. He is engaging and does a lot of breakdowns for the layman (me and probably most of you).

How they film and photograph everything is nothing short of a miracle. I would watch a documentary about the making of this documentary. It is simply stunning. Chin and Ozturk are artists and filmmakers by trade but even so, to capture what they do in the perilous positions they’re in is mind-melting. According to my “research” the aim was never to turn their footage into a film, it was simply for posterity. I for one am so glad they did, but was also wide eyed with terror at times. In a fun way, obviously.

What’s even more brilliant about Meru is that it isn’t one dimensional. As the film goes on stories are teased out from their personal lives, bits of history too and there’s no shortage of drama. I cannot stress that enough. Here is a documentary that has a deep, engaging narrative, expertly told. I began Meru with interest, I finished it in awe.

Breathtaking, mesmerising, terrifying, fascinating. Meru might not appeal to everyone, but I cannot stress how much you should see it. I haven’t given a first time watch a ten out of ten yet this year, and I’m pretty sure I didn’t last year- always hesitant to dish them out until I’ve watched the film a few times. Meru I will definitely watch again but there is no reason in my mind not to say 10/10. Astonishing men, astonishing film.

More ten out of ten Bedsit Cinema rated films? Check these reviews out!...

I SAW THE DEVIL