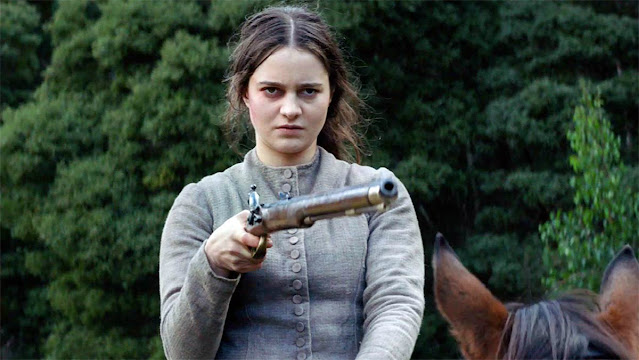 Hello and welcome to The Bedsit Cinema Awards 2021!

Even though it is a year since the last, resplendent, ceremony there were no 2020 awards. This is because I only realised after three Bedsit Cinema Awards that naming your awards after the year they cover (which makes perfect sense) does however give the impression to readers, when you release the piece early the next year, that it’s an old post.

2020 imposed some limitations on film watching, but I watch most of my films, even the epics and new releases, at home anyway. The only reason I didn’t go to the cinema more before last year was my own sloth. However even as a relatively lazy cinemagoer 2020 and the bastard virus has upset my film watching. I realise there’s more important things COVID has affected, but this is a film website which is for escapism. COVID fucked even escapism.

To escape, to feel. Feeling. Film is about feeling and I judge on what I felt. You’ll probably disagree with some of my choices and that’s a good thing, film is all about subjectivity. I’m a very emotive scorer and I can be kind to things people hate and cruel to films of which the general consensus is reverent. My score of 8/10 for Birds of Prey did not go down well, for example. These awards are going to be more positive, a celebration. Mostly. The La La Land Award still exists.

Usual Bedsit Cinema Awards rules apply; the film (or TV show) can have been made in any year, I just have to have only seen it for the first time in the calendar year. That calendar year being 2020, even though I’ve called this the 2021 Awards. I really didn’t think this through. Ah screw it, on with the meaningless accolades!

An award celebrating the subjectivity of film. Sort of. As much as I say I love people having different opinions, Peter Bradshaw loves wanky films. And I’m a hypocrite. He did even start his own awards this last year- The Braddies. What kind of tosser starts their own, personal, film awards, three years after I started mine? I’ll tell you who, a competitor. He knows where it’s at.

Spike Lee is a terrible director whose films I have never liked even though if you don't you're a racist. Don't waste your time on Da 5 Bloods, which is so shit they didn't even bother to name it properly Talking of time, Tenet was/is a waste of it. HOWEVER

The Peter Bradshaw Was Right Award

“In the interest of fairness, Peter Bradshaw scored these films I’m desperate to see very highly. If he’s right, I will do a late award. Maybe. Will I? We shall see, Peter, we shall see…” 2019 Awards

I told you this year would be more positive. While I more often than not find myself thinking Peter Bradshaw sees films completely differently to me, with a much more distinguished and artistic eye and writing style of which I am in no way jealous of, I thought I’d take this year to admit he was right. On these films, not on Knives Out or Tenet or Da 5 Bloods, all of which are average at best.

Yes he reviewed both films in 2018, but rules are rules and all rules I created. Don’t take this joy away from Pete. I said I’d swallow my pride and I have done that. I only needed a little lube. Or Mayo as they call it up north. 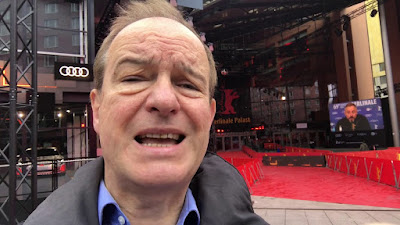 1917 would win only because The Rise of Skywalker was absolute nonsense even for the 9th film in a Sci-Fi series. Sam Mandes’s WW1 effort is classy. But.

This award was designed to celebrate popcorn cinema, not cinematic excellence. The Rise of Skywalker falls on its own lightsaber in that it is supposed to be good and doesn’t even manage big screen fun. It’s bullshit. So, The Only See it in the Cinema on a Big Screen in 3D Award comes down to films I saw on the projector which I felt helped me enjoy them more than I would have on a pathetic little 55 inch TV.

I expected, nae hoped, for nothing more than unabashed action and gore. I got that. It’s never, ever going to be the best film you saw in a year (assuming you aren’t locked in Jeffrey Dahmer’s apartment with this and Exorcist 3 on repeat) but for mindless fun which is perfect seen big and loud, Peninsula wins. Who needs the actual cinema? 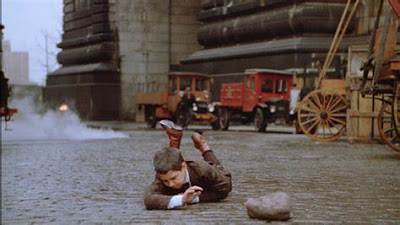 There were many, many, beautifully brutal on screen kills in the bastard virus year. I love some on screen violence which isn't the news. I'm going for an about-turn here, though, rather than a creative, gory kill, the winner is,

Winner: In Once Upon a Time in America Noah Moazezi, as the little gangster Dominic, will steal then break your heart.

What We Do in the Shadows

The Outsider was weird and interesting but suffered with its pacing. Gangs of London didn't give a shit about pacing and just fucked your eyeballs 95% of the time, only pausing to explain why your eyeballs were being fucked. If that sounds like a complaint, it isn't- at least my eyeballs got fucked in 2020. But.
Winner: The Boys
Exists in a wonderful world of its own, spinning into weird brilliance in its second year. The Boys goes where it wants, shoots gore all over you and Karl Urban is a hilarious, bitter lynchpin.

A pretty male heavy category this year, or last year, or all the years given the arbitrary rules I apply to these awards. Margot Robbie is in there because her performance is so much fun, I'm not trying to suggest she's Albert Einstein or one of those great actors. Julien Frison's nomination comes from the same place, I loved watching him. Enjoyment. Fun. Happiness (not the Todd Solondz kind). Entertainment.

Noah Moazezi - Once Upon a Time in America

Tom Hanks- A Beautiful Day in the Neighbourhood

Noah Moazezi is in because he made my little heart bleed. Thinking on that, isn’t bleeding what a heart is supposed to do? All it does it piss blood all up and down your body; it’s just that it’s inside bleeding not outside bleeding and we don’t get all upset and dead about it.

Genuinely a really tough field. Mainly because I'm paranoid that I haven't offered up the correct fraction of women and non binaries and coloured folk and that. What do you mean people don't like coloured anymore, Nan told me it was fine to say that in her day. Nan was wrong, wasn't she, but I don't hate her for not living in the now.

George C. Scott's performance in Patton, one of the best films I saw last year, made me reconnect with the classics. He's hilarious, scary and by all accounts pretty accurate; his George S. Patton performance is bang on the money. I loved every minute watching him. 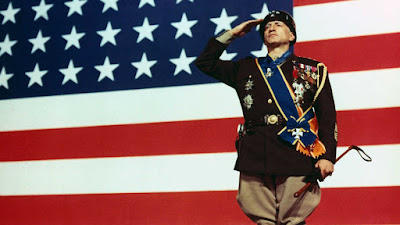 The What the Fuck Award

The Actor I Fell in Love With Award

Robert Pattinson is now a serious, serious actor who I’m starting to love and I never thought I would. The pansy, ex-vamp (obviously I never saw Twilight, he could be hard as nails in it for all I know but he looks anemia incarnate, with lipstick) is now so good I’ve had to learn to stop typing Pattison.

Plus he’s going to be Batman and I’m actually very excited about this. 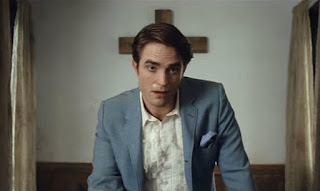 Given I’m claiming these are the best films I saw this last year, you might be wondering why I haven’t reviewed all of them? It’s a mix of timing and ability, basically. Sometimes I’m lost for words and sometimes someone else has said my words before me. Occasionally I just worry I don't have the capacity to do the film justice.

Whereas in the 2019 awards (which were last year) I bemoaned a cinematic calendar with only one 10/10 and no 9/10s, this year is all 9/10s, with no 10. Das Boot is a slight exception, being a film which is a 9/10 that I ruined by breaking it up into pieces because it’s so long and I didn’t have it in me. I regret doing that. These all solid nines, which isn’t a euphemism. For once. 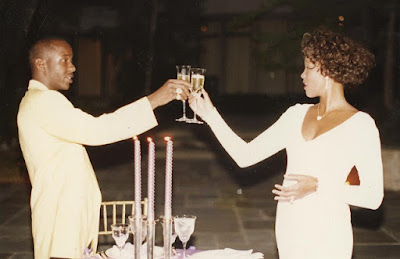 It moved me and it made me sing. Whitney is horrible and harrowing and all the happy increasingly drains away as its subject's life and career descend into dependency of varying forms. I have very desire to see Whitney again, only to listen to her music- over and over. This amount of emotion tips its 9 above the others.

A tough year here. The actual, objectively worst film would of course be Megashark vs Crocosauraus. While I absolutely hated it, I will admit that Horrible Histories was never meant for me. The Rebel was a huge disappointment, but not bad enough that I’m going to upset the Tony Hancock fan club even further (I genuinely copped flak for not liking the film). Or worse upset myself with my own opinion by giving it the La La Land Award.

The La La Land Award was created with the following parameters,

“La La Land is the very embodiment of the kind of horse shit I will not stand for. So smug it's basically fellating itself, with a maniacal grin and giving you two thumbs up. While dancing.”

As such, there is only one winner. A film which apparently nobody ever said “wait, this is bullshit” while making. A film which loves itself so much it named the main protagonist, Protagonist. A film which doesn’t care if you’re bored because it’s so loud that you’re deaf anyway and all you can think about is never hearing your child’s first word.

Fuckity bye, Tenet. Christopher Nolan bouncing back to pretentious was not welcome. To think, this is a man who was able to direct Harry Styles in a role which didn’t make me want to kill Harry Styles (more than I did before).

The Hidden Gem Award is essentially The Best Film Award but with films which while weren’t the absolute best I saw in 2020, were very good and you might not know about. I do appreciate there are some fairly well known films here, but for example Once Upon a Time in America is thirty seven years old this year and some readers may not know it.

The Devil All the Time

The True History of the Kelly Gang

Sorry We Missed You

Once Upon a Time in America

Winner: It’s been a strong, very strong, year for documentaries and Last Breath really came out of nowhere and grabbed me. Sorry We Missed You, though, while a very grim watch is one which I think needs to be seen. In a world where almost everything is brought to us by a faceless delivery driver, it’s a film which will make you see the face and appreciate what you've got. Perhaps even question it.

Mank (although it really doesn’t appeal, I just feel as if I should)

I don’t know why I haven’t seen these. You are reading the film website of a man who saw Das Boot for the first time in 2020 though. Nobody is perfect; that’s my defense and I’m sticking to it.

The Hope for the Future Award

This brand new, fuck you Covid, Award is simply a list of films I can’t wait to watch over the coming year. It will get better, we will get better and I love you all (more than Tenet)! There is no winner, only our continued love of film and for each other.

The Many Saints of Newark

Judas and the Black Messiah

Army of the Dead
Pinocchio

That’s all folks. Thank you for reading and have a happy, safe and cinematic 2021!