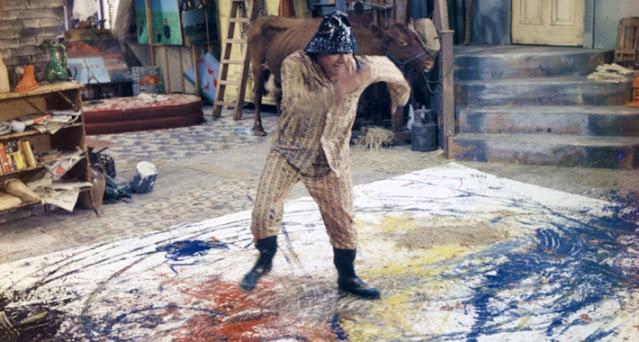 AKA Call Me Genius (which is a terrible title)
Spoiler Free

Tony Hancock is one of my heroes. I’ve enjoyed Hancock’s Half Hour since I was a little kid and used to play old episodes on cassettes that my Dad had taped off the radio. As I grew up and learned more about the man, I forged a kind of bond with him. I feel a kinship with someone who died fifteen years before I was born. I even started writing a play about him, but it’s not very good. Tony Hancock is how I learned to understand my own depression, and the many wicked ways it weaves into and through one’s existence.

Read: The Public, the Private & the Internal

All of which is to say, I love Tony Hancock. I love him and all the gang in Hancock’s Half Hour. I love Sid James, Bill Kerr, Hattie Jacques and Kenneth Williams and I also love Ray Galton and Alan Simpson, who wrote the show and this film. I’ve spent hours of my life laughing to them and there’s something cosy about the very British sense of humour in it; a mixture of sardony, wit and strained but oddly loving friendships. It’s the apex sitcom, one which sixty odd years later is still very much the blueprint used on TV.

Tony Hancock wanted to break out from TV (and prior to that radio) into films, and The Rebel was his first lead role. My remastered copy arrived and I swiftly put it on the projector, looking forward to some good natured humour to make me feel like a kid listening to my Dad’s tapes again. The warm embrace of nostalgia.

The Rebel is so old the full titles are at the start of the film. It’s confusing even to my generation and it made me feel as if I’d nodded off and missed it all. Which to be fair wouldn’t be an anomaly. The Tik Tok generation will definitely pass out with boredom having to suffer reading before any actual words are spoken. They have been spoiled on whizzbangs and bells and whistles and explosions and CGI.

The restoration done on the film is lovely, very easy on the eye, and as Hancock’s character, Anthony Hancock, leaves his monotonous day job to travel to France and become an artist I was really enjoying myself. Unfortunately, once the talentless Anthony gets to Paris and is mistaken for a genius by a group of pretentious arty types, the jokes die out quite fast. The characters are by and large annoying and unfunny. I know it’s meant to be a criticism of the vapid bohemian art scene of the time, a mirror to pretension (“your colours are the wrong shape”) but I just didn’t dig it, man. 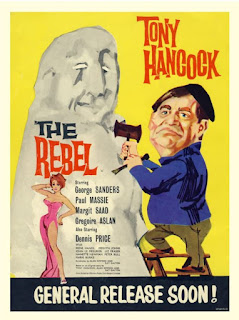 Just as an aside, I couldn’t work out what age Anthony is supposed to be? It’s always hard to tell both with the character and Hancock himself. He looked 44 right up until his death, at 44.

Hancock's character in The Rebel becomes more and more exactly the kind of prick you hope fame won’t make you. What’s worse is the film isn’t very funny and absolutely stinks of a vanity project. Hancock hunted Hollywood and this film was all part of that play. Needless to say it didn’t work and his only other cinematic lead outing he wrote on his own, The Punch and Judy Man. I haven’t seen that since I was a kid. After this, I’m scared to revisit it.

Ultimately Hancock needs a foil. Him setting himself up as an imposter only works when those around him know he is one.

How much better would The Rebel have been if Hancock’s ego hadn’t cast aside the likes of James, Kerr and Jacques? Infinitely. Sadly the man’s misguided quest for solo stardom burned those bridges. Tony Hancock was the most famous man in Britain for over a decade, but in his head it was only on the radio, then only on the TV, then he was being held back by his co-stars, then he needed to be famous in America. Then sadly he broke, completely and finally in a last bid for some sort of stardom in Australia and he killed himself.

And that makes me sad. The pathos, sadness in his on screen persona, really did echo right through his reality, so loud until he couldn’t bear it and he shattered.

I hate that I didn’t enjoy The Rebel (after about the first twenty minutes anyway).

I have no desire to ever see this film again. What’s worse, I fear this review will put you off his other work; which admittedly is essentially just Hancock’s Half Hour but it ran for an awfully long time and is absolutely brilliant. Besides, even if I had written a glowing review, you’re unlikely to spend £10 on a DVD on Amazon. Half you people don’t even have a player anymore. You’re the half who didn’t read past “1961”. 4/10