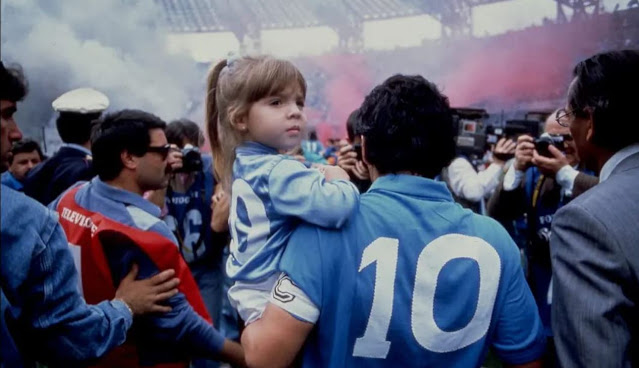 Available to rent or buy on Amazon Prime

With his brilliant, exhilarating, heartbreaking and eye-opening documentary biopics Senna and Amy, Asif Kapadia is in danger of becoming a one trick pony. A one trick pony that can tell you a story and make you feel someone else’s life. Make you see their existence and inhale their highs and lows. Bring you their joy then that person's pain; cry laughing and laugh crying. Delivering intravenous existentialism. That’s one hell of a pony. I want to be that pony.

Ayrton Senna and Amy Winehouse were dead when Kapadia made their docs. That Diego wasn’t when Asif made this film had me worried it might reign in the excesses of the subject. He was a tackle** fiend with a rubber willy (look it up) whose antics in the Gangster's Paradise that is Naples could surely be exploited. My automatic use of the word exploit makes me want to take that back.

As in Senna, seeing the skill and technique of the player, the sportsperson so close up, as well as the dedication which goes into getting to that level just never gets boring. I don’t watch Formula 1 or motorsport of any kind normally, but Senna blew me away. I did used to enjoy Robot Wars though, if that counts.

Maradona played in the Halcyon days of football chants, if you’re a racist. They’re still racist and unacceptable, but in the film they're annoyingly well composed given the genre. Perhaps it’s just the Latin tongue. I counted at least sei canzoni which would have you barred for life now but still have made the charts in the UK given our linguistic ineptitude. Maradona himself provides narration, which is pretty frank and honest. He had nothing to hide, but only because he couldn’t.

As Diego’s fame, which was already pretty deafening from Argentina, hit orbit in Italy his football and his person became property. Property. Imagine being the best footballer in the world and being owned. That’s bad but imagine just being owned. It’s a lot more common. What was I on about? Oh yeah Maradona being alive during production could have toned down what might have been a Scarface-esq descent into self-destruction and how addiction to ambition can metastasize into annihilation.

This might offend some England fans, but I tell you what "The Hand of God" is tempered so much by just seeing seconds of Terry Butcher (ugh) and then Diego score what has to be one of the best goals ever scored. Do you remember when international football was fun to watch? 1994 was fun but I was 10, back then I genuinely thought I’d be a marine biologist (I like sharks). Back then I was so naïve I thought England would qualify for it then supported Bulgaria because I'd been on holiday there. Hero Stoichkov.

Much like the rest of my review, this probably reflects more on me but I wanted to see illicit, unseen videos of Diego banging lines with the Camorra. Every famous person puts it about because it’s hard to do that when you’re not famous and all of a sudden it’s easy and let’s face it everybody likes sex. Well, everybody who hasn’t dated me anyway. 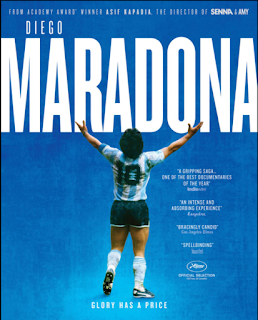 I wonder if when someone gets you a rubber willy do they have to take a cast of the real one or just hope you’ve not and never will get the real one out in front of those you’ve sold quello falso to. If I was a drugs official I’d ask to see the balls. Whip it all out mate. It was the Eighties, they were Ok with all that then. Just ask every person ever. Famous or not, sexual misconduct was Ok then. So whip ‘em out, I want to compare texture and contrast.

Whisper it, but cocaine is NOT A PERFORMANCE ENHANCING DRUG. If I was playing against Diego Maradona I’d have wanted him clucking for a score. Sweating it out. Looking at the sidelines hoping the Mafia had dosed up a water bottle. If he wants to do that, let him. I’ll play that Maradona please. When is Crack Baby Basketball on TV btw?

Worst of all, I wonder whether having a wobbly wang is a wake up call. Clearly not. This isn't a spoiler, btw, the film doesn't mention it explicitly. But then how does one bring it up in polite conversation. Bedsit Cinema isn't polite conversation. There’s plenty in the film about Diego’s lothario-ism, but that’s mainly because there is literally no way he can claim the illegitimate piccoli aren’t his. It’s on record. Also, what a horrifying task, prepping quello falso for that kind of action.

Ultimately Diego Maradona touched God but became property; Kapadia's film teases a fall which was always due. Sadly that fall has hit the end. There's naught left to do than applaud and accept the human in the boots.

"Every Sunday is a rematch"

A salacious subject told with just enough delicacy that you’ll only have to answer three or four awkward questions from your kids. Assuming they can read subtitles.

Nothing could be a bitter, better coda to a wildly erratic man’s astonishing life. His eulogies will not tell his story, just as mine won’t, yours won’t and just as eulogies never have or will. People fear telling the truth sometimes, even when it is hilarious and human. 8/10

*I really wanted to subtitle this review “Tackle, Sluts and World Cups” which if you forgive the sexism and understand what tackle means in South East London, is pretty hilarious. It’s a niche demographic though, so I didn’t. Thanks XXXXX who gave me the bon mot.