When Ken Loach set out making Sorry We Missed You there is no way he could know how its prescience would be magnified by a bastard virus. Written by Paul Laverty the film comes with all the grim realism you’d expect of a Ken Loach film; utterly believable, complex characters and dire real life situations. If you’re thinking “that doesn’t sound like much fun”, you’d be right- Sorry We Missed you isn’t fun at all. It is however, a film you need to see.

Struggling for work, Ricky (Kris Hitchen) is sold into the idea of delivery driving. It is never said which company exactly but that’s not really important as the implication is it's for numerous. He’ll be his own boss, he’s told. A “franchise owner” who works when he wants and all that other bullshit people tell you when what they’re actually doing is washing their hands of any commitment to you as a slave pay master. Ricky quickly learns the hard way the ridiculous targets and very little money are the awful reality.

Now. A word on Ricky, and in fact almost all the men in Sorry We Missed You- he’s a bit of a dick. Wife Abbie (the wonderfully named Debbie Honeywood) is a care worker, helping the elderly and sick. Ricky immediately demands that she completely change her work in order to better serve his desires. 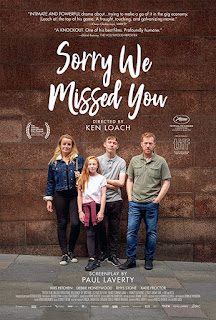 As the couple struggle with one another, money and teenage son Seb (Rhys Stone) who scores high on the dickhead scale too, everything is all rather unbearable. Both for them and the viewer, although daughter Liza Jae (Katie Proctor) is rather sweet, despite not being given a great headstart in life with that name.

Targets are almost impossible, the people he’s delivering to don’t understand quite how horrible the existence of a driver is and the boss who isn’t a boss takes the (soggy) dickhead biscuit. A slimy and aggressive bully. It’s a hard mix to nail, slimy and a bully, but he is it. The film is so well acted that it's easy to forget it's a drama. Which is kind of the point.

Now that we’re all stuck at home, bored and ordering all kinds of crap to keep us from going completely mad, Sorry We Missed You is exactly the kind of reminder we need. A reminder that the people we see for ten seconds when they drop off the Game of Thrones edition of Risk we bought after a few too many, who then scurry away, are scurrying for a reason.

The film is as much about family as work but both are fairly miserable stories, with slim glimmers of hope here and there. Despite all this, Sorry We Missed You is an important watch.

I really don’t how to score this. It is at once brilliant and also an exercise in masochism. We’re all doomed. Or maybe we’re not. We’re certainly less doomed if we appreciate one another a bit more and so far that seems to be what we’re starting to do. From Tesco staff to nurses and once you see Sorry We Missed You I’m certain that’ll extend to the man who brings tat to your front door. Only loses points because Christ it is depressing. 8/10

Want some happy in your life? Try these reviews of more upbeat films (but still see Sorry We Missed You)...
DROP DEAD GORGEOUS
THE PEANUT BUTTER FALCON
WHERE TO INVADE NEXT
THOR: RAGNAROK
BEASTS OF THE SOUTHERN WILD
Labels: Adam Thorn Bedsit Cinema Delivery Drivers Drama For Your Eyes Only Important Ken Loach Review Social realist Sorry We Missed You