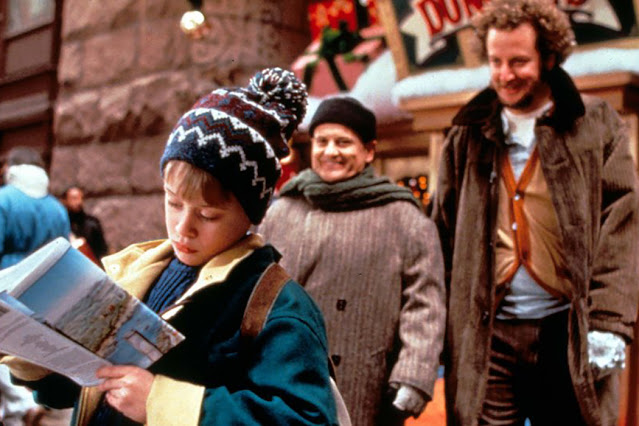 A HISTORY OF VIOLENCE

INSIDE
DIRTY HARRY: THE FULL SERIES
POSSESSOR
THE WILD BUNCH

Home Alone 2 has an almost identical start to Home Alone, which is fine, though I couldn’t help but think that the McCallister family are such careless guardians that they’re almost at the point of having the seventeen kids they seem to own taken away from them. If there was a permit you had to to qualify for to have children, they’d fail. That bag of flour with a face drawn on it would be alone on the flight to New York. With their credit card.

The McCallister family go on holiday at Christmas, again, and their son Kevin (Macaulay Culkin) at least makes the airport this time but wouldn’t you know it, gets on the wrong plane! To New York, not the Bahamas or Hawaii or wherever the hell the rest of them go. In New York, rather than make much attempt to contact his family, Kevin lies, blags and downright frauds his way into a ten year old’s (I’m assuming he’s ten because Michael Jackson was into him then) dream vacation in a fancy hotel. 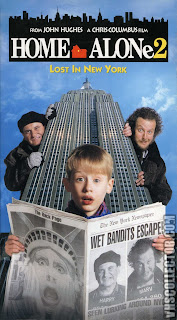 Bad news for Kevin, because hapless criminals Harry (Joe Pesci) and Marv (Daniel Stern) are again in his vicinity; stealing out of tip jars and planning a big score. Kevin is as much a thief as the thieves, but leave common sense about parenting and criminal activity and grievous bodily harm at the door, because this is just a film! I kept having to say to myself, “Yes, Adam, It’s stupid but for Christ’s sake it’s Home Alone 2”.

All the other violent films I watched for the Maximum Violence Season had clearly ruined my ability to chill. I was still on edge from watching Inside. Now there’s a responsible parent.

What surprised me was that it is a long time before the violence in Home alone 2. Last time Kevin fought the criminals off; this time he invites them in and I had to wonder do they deserve this level of torture? There’s no motive other than that he knows them. No threat really. The whole film is undermined by common sense, but like a horror, it’s just a film. It's just a film.

Moving into its strengths, and why the fuck I’m watching it, Home Alone 2 boats some superb slapstick. Acme, Bugs Bunny level, cartoon stupidity- but that’s not a bad thing, that’s the fun of it. Daniel Stern’s shriek is Wilhelm Scream searing. In fact I think the Stern Scream should be a new cinematic thing. This rewatch made me feel like a child again and in a way sad that I have to deal with adult stuff now.

I had it in my head that Home Alone 2 was more aggressive than the first film. It is but in a less fun way. This sequel is the same ding dong demolishment of two dossers, but for a kids film it’s still pretty violent- just more nonsensical and stilted then its predecessor. Kevin is largely the protagonist, which is weird, he's well on the way to sociopathy in my eyes.

In terms of child friendly trauma Addams family 2 gives Home Alone 2 a black eye. Still, children need to know hurt exists, and it’s better through films like this than any other way.

Enjoyable but I wonder if kids will sit through it in the YouTube era given how long it takes to get to the really good stuff. Be damned current-Kinder, I had fun watching people get hit by bricks. 6/10

There are more gentle family film reviews on Bedsit Cinema. Check the out!..