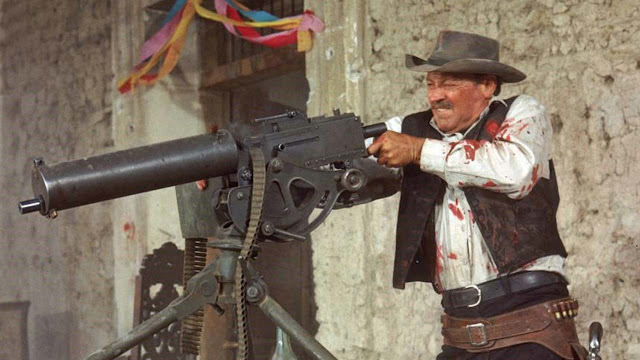 A HISTORY OF VIOLENCE INSIDE DIRTY HARRY: FULL SERIES POSSESSOR

I’ve tried to pick a mix of films for Maximum Violence, some older, some newer, from a few different genres. This was my first viewing of The Wild Bunch- a friend recommended it to me for the Western to review for this Season and it just seemed perfect. I’ve seen a Peckinpah film or two but not since I was a teenager so I was excited.

The brutality in Peckinpah’s films changed how cinema portrayed violence. What was new and shocking in 1969, however, might not carry weight today and I was interested to see whether it still holds up. Right from the opening shootout, all I could think was that The Wild Bunch must have been mind blowing in 1969, and it’s still pretty astonishing, captivating carnage today. Something I truly admire is the exemplary stunt work that you really only see in the older, pre CGI films. Patton being another that came to mind.

Stick up gang The Wild Bunch, Led by Pike (William Holden), are on the wane as an outfit. They’re ageing and desperate for a big score. I don’t know any of the actors and honestly I don’t care to pretend I’m au fait with 1960’s Western stars just so you respect me more. Literally every character (male character) in the film is perfectly happy killing men, women and children. It’s got a mean, almost cruel streak to the story; nothing is softened in The Wild Bunch. Which I quite liked. They do not give a solitary fuck. Truly amoral. It’s less a case of there being no honour among thieves, but there being no honour whatsoever. 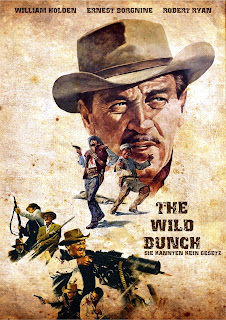 After the ferocity of the first frames, The Wild Bunch lulls a lot in order to build the narrative and characters (yawn- I want bodies!). It does meander in its middle, but you know the action is coming. Once it does get going, like the train The Wild Bunch aims to rob, it’s a blunderbuss on full steam ahead. Some of the bullet hits are brutal, bloody and believable. I loved it. The finale truly is maximum violence, sheer, protracted mayhem, where the buzzards eagerly await the meat of those fallen from mortality.

Some final thoughts: There’s boobs and blood aplenty- but weirdly no cuss words. Also, it might be my DVD copy but there were no subtitles for the Spanish spoken scenes. Perhaps that was how it was. No matter, I’m good at cunning-linguism, I’m just out of practice. Finally- Oh god they’re planning a remake. Remember how good the Magnificent 7 remake was? No, me either, because it sucked and I turned it off. If the makers stick to the blood and thunder, and make the middle act a bit livelier, it could be good fun though.

While it doesn’t glorify violence, The Wild Bunch doesn’t exactly make any comment on the futility of it, it just is what it is. Violence exists, and here it is. Overall still holds up and wreaks thrilling devastation at its high points.

It boasts an apocalyptic conflict at its conclusion; full on mayhem and murder. However, the meandering middle separates The Wild Bunch from a higher score. Well worth a watch though, and way ahead of its time. 7/10