The Addams Family (2019)
Spoiler Free
Animation/ Comedy
Rated PG
Netflix
There’s been a little break recently on Bedsit Cinema, mainly because I’ve started a new job but also because I felt I was losing my way a bit with my writing. When I started the site my aim was to have fun writing reviews of films I’d seen, whether I loved, hated or was indifferent to them. Recently my writing had lost sight of the most important thing in the process. Me.
Anyone can talk about a movie’s denouement, or say they didn’t like the pacing, or compliment how the colours matched the tone of the film and sound like a critic. I have done that for the same ends; but it's not really me. Who can truly claim to be me? That’s right, only me*. So, from now on, expect more of me; by which I mean I’ll be writing a review to whatever purpose and in whatever style I like because Bedsit Cinema was always supposed to have the same eccentricities as me, not sound like any other review you can get online.
Fittingly, The Addams Family and Addams Family Values are two of my favourite films, particularly comedies. Witty, dark and very, very weird they are also something of the bridge between the terrifying children’s films of the eighties and the lighter, less traumatic films of the late nineties and early Twenty First Century. 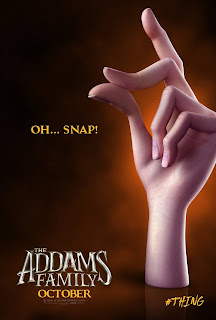 Because kids are lazy and don’t want to watch something “old” like those two Addams Family classics, and because parents don’t want to pay for the therapy one sitting of Return to Oz will incur, we have a new, animated incarnation- The Addams Family. Bells, whistles and worst of all, songs. Gross.
I tried to put my cynicism aside.
Opening with Morticia dusting her eyes from a pot labelled “Mother”, I was encouraged that this Addams Family incarnation might not be the watered down sugary crap I was fearing. I then wondered how one replaces dead-mother-mascara. I suppose it didn’t say whose mother.
The Addams Family descended into on trend mediocrity from this first scene. Everything about it annoyed me. Take Gomez, for example. The whole point of Morticia and Gomez was that they’re both sexy. At least that’s what I thought. Oscar Isaac would have been perfect for Gomez in a live action remake but in this animated version he looks like Despicable Me’s Gru in a cheap wig. Built like a weak armed fat man. It is not fitting for the character and as all the top film critics say, it fucked me off no end.
On the voice acting “talent”, it’s worth pointing out that Snoop Dogg is in The Addams Family. I suppose it one ups MC Hammer doing the 1990's associated song but Snoop’s appearance reminded me I’d blocked MC Hammer from my mind as if he was a neighbour who'd touched me. Looking at the positives here, appearing in The Addams Family is at least slightly higher up the artistic spectrum than a Just Eat advert. Just. Well done Snoop.
Ultimately, I do understand what they’re trying to do (I think) by making the characters more relatable to today’s yoof, but the whole point of The Addams Family was that they’re not relatable, they’re nutters. That’s the fun of them. I didn’t have fun watching The Addams Family.
Bedsit it?
I’d rather watch the MC Hammer video for The Addams Family (1991) on repeat for an hour and a half than see this film again. Kids these days are gonna be pussies if they grow up on this begnine crap. 3/10
*Zac Efron has a shout but only because we look exactly the same.
Why aren't you terrifying your kids? They need hardening up! Try these films...
THE DARK CRYSTAL
I SAW THE DEVIL
HOUSE OF 1000 CORPSES
APOSTLE
ok ok and a good kids film PETER RABBIT
Labels: 90's Adam Thorn Animation Bedsit Cinema Charlize Theron Comedy Family Kids Movie Review Netflix Oscar Isaac Review Snoop Dog The Addams Family