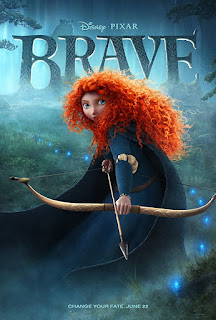 Tagline: “Change your own fate” But only when Disney tell you to.

Premise: There's a princess, called Brave, some bears who eat her porridge, a wicked stepmother, and Disney continuing to confuse kids worse than my memory of what Brave was about.

Delivery: A Disney princess film. I know, a bit of me right? But I had quite fond memories of Brave from my first viewing. It follows Princess Merida in the highlands as she lays waste to expectations and forges her own path. There's some good physical humour, set plays and characters. Breezy and light, and as you'd expect the voice work is good. It looks impressive, although, not as great now as at first. I checked and it had a $185,000,000 budget! What the fuck, did they pay per pixel? Actually I know for a fact that's almost exactly what they did

I like having a female lead character who challenges the accepted roles for women, it's a nice message for kids to say you don't all have to be the same, girly girls and objects for men. Although my niece has also got a full wardrobe of the Disney princess dresses, and wigs which contradicts Brave's "message". She often insists, through tantrum, on wearing them out the house. Maybe she'll grow out of it, but at twenty three I've told  my sister to Let it Go. Which she didn't find funny either.

I'm kidding my niece is only three, but it makes me confused about Disney's idea of what the fucking hell kind of a message it is sending. I mean, saying a character is a hero, forthright and able to challenge the norms, but then reducing her to sales of wigs and dresses for children is like Willy Wonka being played by Jimmy Saville. OK alright I admit it's nothing like that; I just think that it's a funny concept. So on that note, while we're joking; fuck it, Saville as Wonka, while directed by Margaret Thatcher, the also dead cunt. No milk chocolate in that factory.

I'd been trying to get my niece and nephew into the classic Disney films, rather than the shit remakes; none of which I ever worked on, honest. Ahem. Weirdly the six year old boy was scared of Willy Wonka & the Chocolate Factory, which only starred Gene Kelly, not my incarnation which I could understand being scared by; while the three year old girl loved it. However she was nonplussed by Mary Poppins but he was, “entranced” by it. Kids, eh? He's too big for his sister's dresses, but I'm already considering an alternate Christmas present, just for laughs.

"But your mum said you were into Marry Poppins"?

Bedsit it? Despite being quite keen to rewatch Brave, I was a bit bored by it towards the end. I was never expecting it to blow me away but it's less good than memory served. It's also not as funny as I remembered it being, which was weird. 6/10