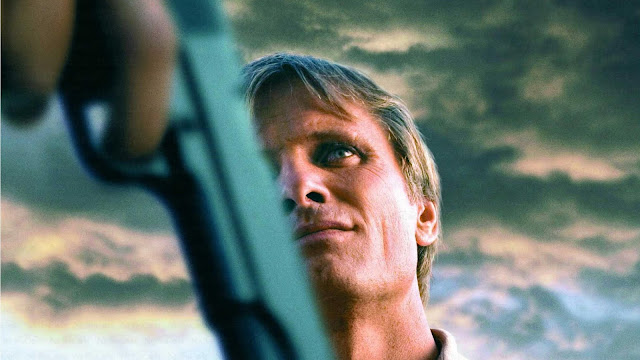 Violence. Odd thing isn’t it; repulsive and yet sexy. Something we abhor yet lust for in a primal way. We admire it. Succumb to it. Enjoy it. It’s a clusterfuck of morals and emotions, violence.; most notably in cinema and I thought I’d celebrate it. I hope you’ll enjoy the reviews, see a film you want to watch or two and revel in the blood-letting along with me.

A lot of time (relative) has been spent balancing this season- genres and age of film and importance to how violence is depicted have been taken into account. Also taken into account has been what I felt like watching and what I was able to review. Some films I can't write up, even if I want to. I don't get paid for doing this. Yet. First up is David Cronenberg’s A History of Violence, because I hope Maximum Violence is something of a history and also because it is a violent drama.

Violence and sex are so interwoven only the French have come to terms with being blasé about the complexities. What is wholesome oh too wholesome will slowly be ruined, sexed up and then made angry and murderous in A History of Violence. Is sex wholesome? Depends on a lot of variables I suppose and this film hinges on moral vagaries.

Viggo Mortensen is a diner owner ,Tom Stall, in small town America. He has a beautiful wife Edie (Maria Bellow) and his son Jack (Ashton Holmes) has all the problems with dickheads one might expect of high school America. There is a daughter, Sarah (Heidi Hayes), though she’s far too young to really be important to the plot.

Except for dickhead teenagers, the family's life is perfect, rural America idealism. Dickhead teenagers are allowed to run riot in the States, apparently. I’d wish violence on all of the pricks but that’d make me part of the problem not the solution. I may also be basing that opinion entirely on cinema and my brief run-ins with frat boys on my 2012 road trip of the southern States. 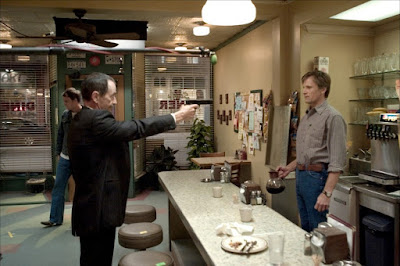 Tom’s diner looks delightful. Serene, nice food, friendly. Except for when the gangsters rock up it’s ideal. Convinced they know Tom from a previous life as one of their crew, their cup-o-Joe turns into a shoot out. From this point, the Boston mob plagues the Stall family. All very small town goodness- right up until it isn’t and the safe, suburban setting segues into pure violence. Nothing is ever as safe as you think. Even I have seen a shooting, but then I was on the Old Kent Road, so I was asking for it.

A History of Violence is a guessing game of who is capable of what. Ed Harris as a one eyed villain has a ghoulish detachment from the wickedness he wreaks. It could almost be called cool, but he’s a bastard.

Like a lot of Cronenberg films A History of Violence features in one place sex and violence coexisting in an absurd way which weirdly echoes life. Anger and sexual intensity. I know I said earlier only the French have mastered that unholy marriage but Cronenberg is Canadian which is almost the same thing. The action and blood burst into A History of Violence like beautiful flowers of flesh and I absolutely loved it.

The more I see and love a film the more its score creeps up. A History of Violence hit 7 first time, but has bludgeoned its brutal way to an impressive score via rewatchability. 9/10

Pallet cleanser time! Some unrelated film reviews, check them out!...