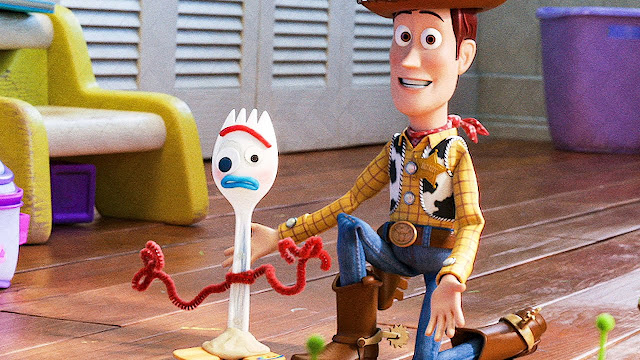 Ah, being a child. Such an underappreciated blessing not having to worry about anything important. Although importance is entirely relative and therefore not getting a Gameboy for Christmas is exactly the same as not being able to pay rent. I saw Toy Story (1995) in the cinema, which would have made me eleven or twelve and as such homework was my biggest life-stress. I was just getting over the Gameboy disappointment by then, too.

Every time a Toy Story sequel has come out I think to myself “ah I’ve outgrown these”. Every time I’ve actually sat and watched said Toy Story sequel, however, I have enjoyed it. Toy Story 4, you may have noticed, is the third sequel to Toy Story and I was in danger of becoming to the series what Peter was to Jesus; denying it three times.

It was a rainy Saturday morning and just like St. Peter I was up before the Cock crowed (not a euphemism), lying in bed and it was too early for an episode of Bones or the latest violent Sci-Fi on Netflix even for me. I was actually pretty hopeful for Toy Story 4, having accepted my prejudices were twice proven wrong and also because my body clock hadn’t woken my cynicism up yet.

The Toy Story series has always been the kind of sweet natured family film which doesn’t need any meanness in the narrative. Apart from the other three films, Toy Story 4 is the perfect example of this. I’m going to take a bit of a liberty here and just assume you know the characters, but basically the gang (Woody, Buzz and the other ones) have a new owner, a little girl called Bonnie. Just starting pre-school, although having been to America it could be University, Bonnie makes a new toy- a Spork with glue on eyes and pipe cleaner arms called Forky.

Making a toy from disposable cutlery is at least Community College level academic work I think. A whole module. 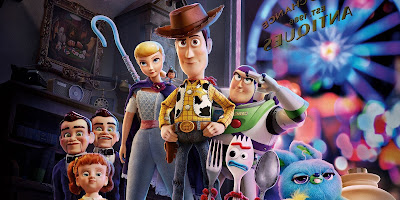 Bonnie's family go on a road trip and for reasons I will not explain because the film does that for me, Woody, Buzz and the gang get split up and end up on their own journeys, all with the same aim- meeting up and being together again. On their way a whole host of new characters with top-notch actors voicing them are introduced. They're all distinct and very, very funny. Plus the trajectory the characters each take isn't as predictable as you might expect.

In the previous three films, from memory, I don’t recall the toys ever speaking so that humans can hear them. Toy Story 4 sees them do this and it is to hilarious effect. You could say that Toy Story 4 is Fork-ing funny (oh shut up you knew it was coming), and I certainly do. It is warm, as is my bed because I didn't want to walk to the loo, and the first of those warmths was comforting, in a way.

Just to temper that last sentiment. Alongside today’s more upbeat, syrupy, optimistic and funny children's film, I'd love there to be more made with cold, hard, terrifying surrealism. Kids need that to be driven into their feeble brain matter, by way of balance. Just like I had as a kid. Show them Return to Oz as part of a double bill with Frozen*; similar themes, different approach. Show them Return to Oz first, though.

"You behave or I put Return to Oz on again!"

That film is a parenting/ psychology tool like no other... If all this sounds like I hate kids, I don’t, I want you all to be as miserable as me.

Ultimately, sometimes, it’s nice to feel like a kid again; a time when Gameboys and homework are the most important thing. To laugh at the silly things. With Toy Story 4, for an hour and forty minutes, tucked up in bed on a drizzly Saturday morning, I did. Hey, you probably can too. 8/10

*Obviously I haven’t seen Frozen- only the sequel. Didn’t have a clue what was going on.