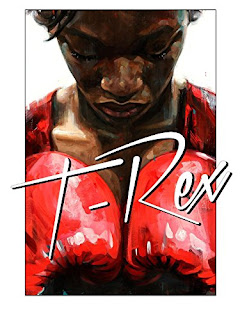 Tagline: There isn't one, and I felt bad starting my new policy of borrowing one from another film on T-Rex.

Premise: Documentary following teenage boxing prodigy Claressa “T-Rex” Shields, as she pushes for a place at the London 2012 Olympics, whilst contending with a disadvantaged and fractious upbringing.

Delivery: If you are into your boxing, you'll most likely know Claressa Shields' story, or at least who she is. It's not important to know anything in preparation for T-Rex, but it is important that you watch it. Shields hails from Flint, Michigan, famous for exporting cars and Michael Moore, the documentarian. I like that he's a guy from Flint who changed his life for the better by making documentaries, and this is a documentary about someone in Flint trying to change their life for the better. There's a cyclical beauty in it.

T-Rex does have an element of 1994 basketball documentary Hoop Dreams, in that like the subjects of that film, Claressa is reaching for the American Dream by the only means available to certain (poor, mostly black) people; sport. If you haven't seen Hoop Dreams you really should, the two paint quite the damning portrait of the American sport set up, although T-Rex does so with finer brush strokes. Claressa's rise through the sporting system sees her grow as a person inwardly and outwardly, as she transitions from a child being cared for by her coach, to her family's main breadwinner on the subsidy provided by Team USA.

It it heartening to see Team USA preparing this precocious talent for the worst aspects of professional sport, by treating her a commodity from the get go, just so she doesn't get any big ideas. It's hard watching T-Rex to see why anyone would stay amateur. To be completely honest though, at first, I found Shields a little annoying, but only in the way that all teenagers are a little bit annoying. As the film progresses and she becomes more sure of herself, it's impossible not to root for her. While the boxing side of T-Rex is fascinating, it's not really anything new, what shines through is Claressa's strength of character, for better or worse. Character made in the mould of her coach, a regiment and outstandingly devoted man, Jason Crutchfield.

Shields is bull headed, I like that, though as with any bull headed youngster it misfires and comes out wrongly at times. She's talented, sweet, damaged, strong and often sees with greater clarity than the adults who surround her. When she's told she's not allowed to say she likes boxing because she likes beating people up, her confusion is the sane reaction. A few years on from the release, and more from its filming, it is wonderful to see the real Claressa Shields emerging, the woman is a force. Forged in adversity, tempered in honesty, and as prodigious a talent as they come. I'll end on my favourite quote which captures perfectly the mix of clarity/ naivety Shields sees the world with in T-Rex,

“Don’t tell me not to lie then punish me for telling the truth.”


Bedsit it? T-Rex is available on Netflix, it's snappy, well shot and a good length of 90 minutes (Hoop Dreams, while brilliant, is a 3 hour commitment). Not to be confused with Tyrannosaur, the bleak 2012 Paddy Considine drama. T-Rex is well worth the effort. 8/10
Labels: Bedsit Bedsit Cinema Boxing Claressa Shields Documentary Film ratings Michigan Movie Reviews Netflix Olympics Sport