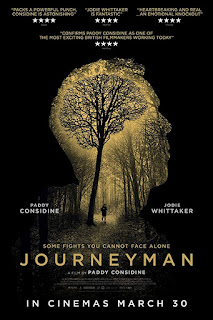 Tagline: “Some fights you cannot face alone" I like this, much better than the other one they had. This is a family film, sure, but not like that.

Premise: Boxer Matty Burton wins a world title, takes a difficult defence, suffers a brain injury and goes through what can kindly be called some tough times.

It is so hard seeing a person struggle for words where they previously wouldn't. The slip towards an infantile state, the awful, irreversible slide away from personhood is something uniquely hard. Can a person fight that loss, that violent removal of self? Ask any cancer or stroke survivor, even a person with epilepsy. The answer is yes, but it isn't easy. What Journeyman does is paint that difficult attempt to climb back toward one's old self cinematically, using the conduit of a boxer. It's not not a journeyman it's a journey, man.

Paddy Considine is a wonderful actor, and now also director and writer. His feature debut as director, Tyrannosaur, was brutal. A hard watch but also a brilliant, powerfully human film. Dead Man's Shoes is an eternal favourite of mine and the relationship with Shane Meadows almost produced a film about the bare-knuckle king, and uncle of 13-0 Nathan, Bartley Gorman. Evidently a boxing fan, Considine also appeared in Cinderella Man with Russell Crowe and litters Journeyman with cameos from real life names from the British scene. Seeing Brendan Ingle was a touch poignant.

Structurally, Journeyman is an inverse boxing film. The climatic fight isn't in the ring at the end, it's preceded by the ring. The ring hosts the opener; the fight, the cause, the silent, narrative antagonist. The setting for the following struggle rather than the host of its conclusion. I'm repeating myself, but with reason. Do not expect a straightforward boxing film. Last year's Jawbone was excellent but much more traditional. Journeyman is a drama about a boxer and his family, as Matty and wife Emma (Jodie Whittaker) try to recover.

It is in places an awfully hard watch. Part of the reason it resonates is the obvious willingness to participate, the bond, the fusion between man and sport. Love and desire are strong themes in Journeyman as we watch Matty fall apart and try to rebuild in more ways than one. It is largely believably done, though seeing journalist Gareth Davies attempt to act out asking a question was pretty painful. Sometimes it is OK to get an actor. Overall this is an excellent film, but one which left me asking...

I can't decide if it is understated or a bit easily done. I've seen people struggle with brain injuries and, as Journeyman captures, it is no picnic. You're infantilised. Admittedly, both my main sources of reference died, so they're no bloody good. Though the point remains. Reflecting on this in the week since I've seen the film, the battle between the realism and the fantasy, the desire to portray a believable, gritty drama and a sports film created a narrative dichotomy for me which doesn't spoil the film, but paints a different picture. Journeyman is unique.

Bedsit it? It might sound like I'm not going to score Journeyman highly, for that I apologise, I am. But it was a film so important to me personally in many ways, that I thought it over too much. Overthought it, if you will. Considine, Whittaker are brilliant and I have no doubt the score will remain the same or improve in future.