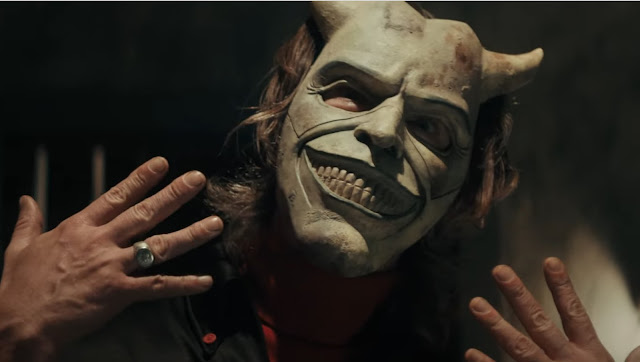 Because I was sold pretty early on by a teaser trailer and the fact that I enjoyed director Scott Derrickson’s Deliver Us From Evil and Sinister, I tried to steer clear of much by way of reviews and further info about The Black Phone.

In a small town in the mid-seventies (I think), adolescent boys are being abducted by a mysterious killer in a conspicuously shady black van that might as well have “rape van” finger painted on the side of it in blood.

The setting and acting from the kids is pretty engaging, and I particularly enjoyed the tweenage, potential psychic Gwen (Madeleine McGraw- who is excellent) calling detectives “dumb fucking fartknockers”. The Black Phone starts well, with a nice bit of character building before Ethan Hawke’s “The Grabber” rocks up and takes Gwen’s thirteen year old brother Finney (Mason Thames) captive. It’s even a bit believably upsetting, with a crime element, building my hopes that the horror would take root in reality.

Finney is imprisoned in The Grabber’s basement, with only a mattress and, you guessed it, the plot centering black phone. The Grabber dismisses the phone, but it doesn’t have any real reason to be there and if you are kidnapping and murdering children, why even risk having a phone in there? The Grabber seems intent on boring Finney to death in a weird voice and with a bland diet, rather than doing anything one might expect a serial killer to do. 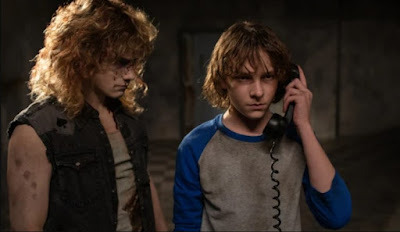 Not only is it completely fucking stupid, it’s also boring, dragging out the mystery with very little tension and threat. Hawke isn’t as good as I'd hoped and being hidden behind a mask is probably why he resorted to the silly voice. He sounds like the Joker's touched cousin.
Visually, The Black Phone is flat and I grew tired of the nonsensical conundrums which are supposed to bring fear and excitement. I only assume that they’re supposed to bring fear and excitement, by the way, because apart from an occasional sense of humour there is nothing which kept me watching past the hope that the payoff would payoff.

In a world of throwaway cinema (streaming), The Black Phone needed a cinema release and price tag on it because the idea that every second was costing me money motivated me to keep watching. The film drags itself to a reasonably predictable ending and is a waste of time for everyone involved, most importantly of all: me.

I swear to the unforgiving, meaningless universe, if there’s a sequel to The Black Phone I’ll… not be surprised, sadly. The Bedsit Cinema can only give you my opinion and experience and the film tediously deteriorates after a promising start. No spite, no style, no scares, no sense and nothing new. I finished it, but it cost me money. 3/10