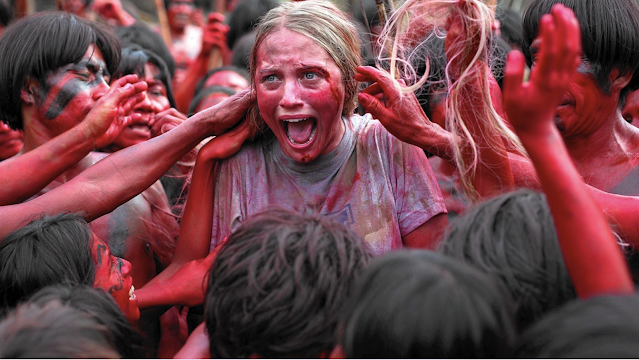 Freshman (fresher for UK readers) Justine is becoming politically awakened and somehow gets roped into joining irritating student hippies at her Uni- led by the handsome but aloof Alejandro. Alejandro and his merry band of sycophants are on a mission to Peru. Saving the rainforest from developers is the aim, doing it with a pathetic, self congratulating gesture is their game and the students self righteously wade way out of their depth. Things only get worse when they come across a tribe of cannibalistic natives deep among the trees, far from help.

This is why gap years exist, at least there's no loan to pay off for your bereaved, bereft and ashamed parents. Die in your gap year you selfish pricks!

The Green Inferno is written and directed by Eli Roth, of Hostel and Cabin Fever fame: Shit. Gets. Messy.

Bright eyed and bushy tailed idealists are fucking annoying once you grow out of being one yourself. In The Green Inferno for some reason they also carry guitars and sing songs which is maybe an American thing but from the tone of the film this annoys our friends across the pond as much as it does us po-faced Brits. Put the guitar away, you wanker.

My first recollection of coming across this “save the world with a futile gesture” (COUGHrecyclingCOUGH) approach was when there was a protest against confectionery conglomerate Nestle at Derby University while I was there. It was something about their baby milk and African mothers and babies and it all sounded like yes Nestle were being arseholes, but it culminated in the devastating futile blow to the company via a vote that the Uni not sell their products on campus.

As far as I could work out all it meant was that chocolaty rivals Cadbury’s got ever so slightly more business in one building, in a small city, in the UK. Sock it to ‘em, students! My disdain is equal parts undergrad-iot campaigners and also my not being able to buy a Toffee Crisp in the shop. It is a fact that along with Rolos, Munchies and Kit Kats, Toffee Crips are the best commonly available chocolate treats on these shores.

Banning them for fuck all purpose is cutting off your nose to spite your face in my opinion.

What next, no Carling in the bar just because they might sponsor female genital mutilation? No! Ban Carling because it’s pisswater*. 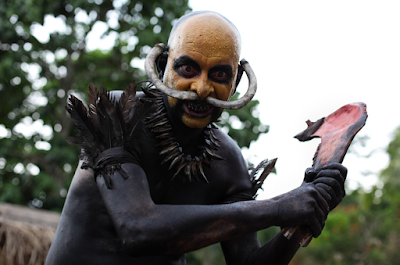 The students in The Green Inferno are, it is made clear, mostly fools and followers. Narcissists and know-it-alls. I was immediately relishing the promise of their disturbing, brutally painful deaths. Gleefully anticipating the dicing and dinner they’d end up as. Ultimately, when this happened, while I adored the gore and torture the tribe prescribe, I genuinely thought as they put a limbless torso in the oven “urgh, they haven’t removed the organs and bowels. They’ve spoiled it”.

The Green Inferno has a wicked, dark sense of humour- you do have to have a strong stomach to spot it though. As a film, its tension builds slowly then explodes into a frenzy of carnage and death which while very intense in places largely follows what one expects of a film such as this. Roth’s love of Cannibal Holocaust is worn proudly but that’s no bad thing, Cannibal Holocaust is superb.

Further, there’s a few little layers, subtext, mystery and additions to The Green Inferno which rather subtly add to it, it pays to pay attention rather than switch off completely and await the blood letting. A lot of horrors overplay this element to the film to the point of cringe and annoyance, Roth’s film manages it well while remaining shockingly fun.

A real feast for gore-hounds and an undeniably trashy throw-back that doesn’t feel dated or like a remake. Personally I wish Roth stuck more to this kind of thing. 7/10

*To my knowledge, Carling do not sponsor FGM. It is pisswater though.

If you're still reading, thank you. I'm still sweating on one or two jokes I made in that. More reviews!..

More, more gore! Some other disgusting films which you definitely want to read about. Check these out!...

POSSESSOR
INSIDE
ALL OF THE FINAL DESTINATIONS- RANKED!
3 FROM HELL