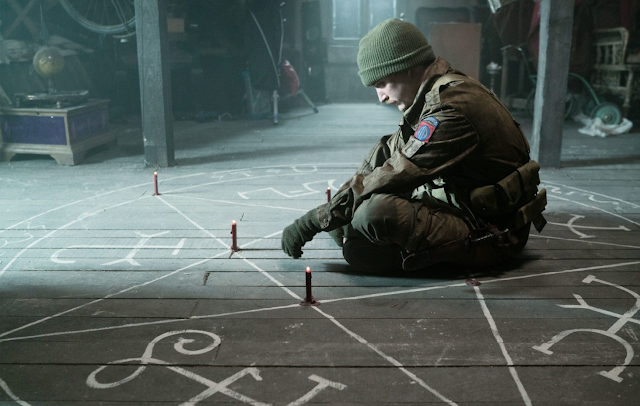 Ghosts of War’s Writer/ Director, Alex Bress, was last in the chair for a film in 2003’s The Butterfly Effect. I rather liked The Butterfly Effect, though I admit I haven’t seen it for probably over a decade so whether that still applies is anyone’s guess. The Butterfly Effect is my cinematic Schrödinger's cat; I know I did like it, but do I anymore? I need to open the (DVD) box to find out. For the record I don’t like cats. I much prefer this experiment with films- even if it doesn’t really hold together philosophically.

The premise read a little like Overlord with ghosts, which sounded pretty good to me, even if nothing more than pretty good. It's always worth taking a punt on those films which entice but might not deliver, otherwise one doesn't grow as an audience. Just like Overlord, Ghosts of War starts with setting the war scenes up well, and nicely brutally, then slips comfortably into creepy. It’s not as bombastic, but it doesn’t need to be. 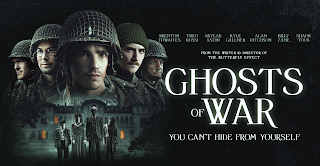 The small remnants of a US fighting force (less than a squad) wander almost aimlessly across occupied France until they get a call to relieve a unit in a beautiful, grandiose and instantly suspicious Château. I’m doing it a disservice by calling Ghosts of War a haunted house film with war but, ugh, fingers and brain tired, and I’m also BOO!

JUMP SCARE! There are jump scares, but Ghosts of War doesn’t lean on them for its horror, fortunately, because as I just demonstrated with subtle aplomb, jump scares aren’t a good thing to lean on for true effect. There's plenty to like as secrets are slowly revealed but in its tail the film carries a huge narrative shift.

There’s a lot of criticism for the ending online, and I was expecting the worst if I’m honest. Of course Bedsit Cinema is spoiler free but what I will say is yes the conclusion is a bit silly, but I didn’t mind it. I’d rather a film tried to do something new, even if it doesn’t always work perfectly.

In places an effective, fun horror which should be commended for not always going where you might expect. Also scoring points for Ghosts of War is some lovely, deliciously bloody, violence and it won't cost you a penny (if you pay for Netflix which I assume everyone does). 7/10