The indomitable Den of Geek had Psycho Goreman among their best films of the year so far. I’d not heard of it but it sounded crazy; a sister and brother find a stone that controls a long imprisoned, murderous alien warlord. Younger sister Mimi holds the stone and therefore the control. Mimi is a strange child, names the creature Psycho Goreman and makes him do her childish bidding. Every petty whim (she’s about 11 I’d guess) he has to obey, unless he takes the stone from her.

The stone and creature’s awakening attracts a cavalcade of interstellar killers who show up to collect the bounty on Psycho Goreman who eons after his imprisonment remains universally unpopular to say the least.

Everything you could possibly hate about this film the makers knew in advance. Yeah its lead Nita-Josse Hanna as kid cosmos controller Mimi is jarring, initially, but I warmed to her. Of course the whole thing is cheesy, but enjoyably so. No it doesn’t make any sense except for the MacGuffin stone. Who the fuck cares? This is a knowingly preposterous, Troma-tribute, throwback piece of cinema with rubbery costumes and a wink, wink, nudge, nudge affect.

How do you criticise wooden acting with so much rubber over it? No really. Genuine question. 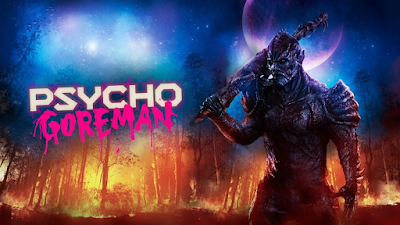 Psycho Goreman is funny, it's gory and it is creative while also being an homage to so much 80’s horror. Homage is a nice way of saying derivative, isn't it, but I'd only use that word when I mean it. Homage and plagiarism are different. Digression. What Psycho Goreman isn’t, categorically, is scary and Writer/ Director Steven Kostanski (The Void) knows this. Everybody making the film knows it, that’s why it’s so enjoyably camp. Counter intuitively, you have to be pretty smart to make a film which is this knowingly dumb.

I mean it, look at Peter Jackson. Famous for the brilliant Lord of the Rings trilogy, literary class on the big screen, and his first two main feature films were Bad Taste and Braindead (Dead Alive). Cheesy, blood splattered B movies now revered probably as much because of what Jackson went on to do as much of their camp, silly sense of grim. Jackson is an intelligent film maker, and so is Kostanski, getting this type of film right is not as easy as it might look.

New to me but not new to me, Psycho Goreman is a different beast, meant only for the chosen. Not of this earth.

I was never really into Troma, although I did like the Toxic Crusader kids cartoon show which was based on one of the most popular Troma efforts of the same name. There was also a cartoon for kids of Attack of the Killer Tomatoes- maybe I need to see the original film. Anyway, Psycho Goreman grabbed me more and more as it went on. Not for everyone, but I imagine if you like it you’ll really like it. 8/10

Perhaps you want a break from all the madness? Maybe I will, Maybe not. Check out these reviews...