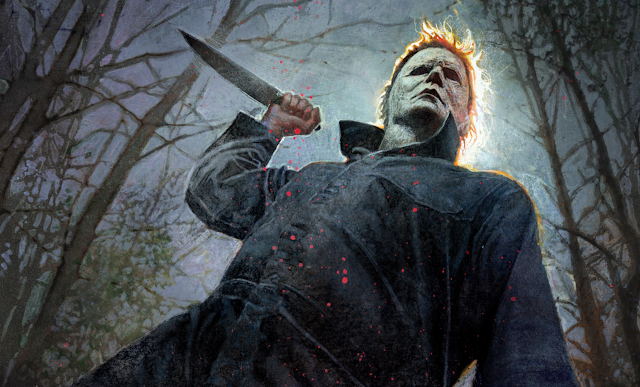 Halloween is different in England than in America; we Brits secretly like a faux holiday but are too prim and proper to admit it. Fun? That’s for heathens, but yes we’ll buy it! Halloween is tailor made for heretics who love scary smiles and I am one, provided fun is entirely defined by me. If you see someone on a dating app say they “love having fun”, be suspicious. Who doesn’t like enjoying themselves- fun is subjective. My idea of a good time might be a nice meal and some wine but what if by “fun” your date means strangling kittens and pushing old people into traffic

Maybe psychopathy is your enjoyment, and I believe Donald Trump is working on his own social media platform purely for psychopaths and idiots. In the meantime though, don’t kill kittens or old people unless a giant lizard politician told you to through your tin foil hat. Or they deserve it. Some of them deserve it.

A tacky, toy selling festival of fear for kids, which I loved as a scamp, has evolved into an excuse for adult me to watch horror and hope nobody knocks on my door because I haven’t quite devolved into scary man caked in blood yet, and I hope I don’t have to. That’s my Halloween. The less said about why I might be caked in blood the better. As a child our street arranged for the parents to let us dress up and go to each other's houses for pre-agreed sugar. Mainly to avoid dangerous loners, I imagine.

This is funny because I’m pretty sure from every film ever in America they just assume either nobody is gonna nonce your kid, or that everyone is. The world is more shades of grey than that, but why take the risk? My street's parents didn't and our bloodthirsty outfits were a lovely creative outlet.

I’ll tell you a secret, my shepherded, sanctioned, sanitised scares were more exciting than Halloween (2018). It’s a pile of boring shit which doesn’t even attempt to be anything other than an imitation of John Carpenter’s original.

Fake blood is a weird one; there’s not enough of it in David Gordon Green’s Halloween which I’m nominally reviewing. Back in the day I’d experiment with recipes for counterfeit claret. Ribena, ketchup, coffee granules and water was good, better with some food colouring but that'll stain skin after. All about the levels. Smooth, sticky but dried well. Did anyone else do this? It tasted rough but you got to suffer for your art.

Jamie Lee Curtis coming back to the Halloween series doesn’t make it better, as much as I like her. Horror is famous for stupid errors by the protagonists, it’s a trope which is part and parcel of the genre. Halloween’s characters are so stupendously stupid it’s impossible to care about them and I include Jamie Lee Curtis’s Laurie Strode in that. If you're that scared, don't build a fort at great expense, move abroad you mad cunt, there’s no way Michael’s getting a passport.

Rob Zombie’s Halloweens are by far my favourites and that includes the originals. Particularly his Halloween II is, in my opinion, brilliant. Zombie brings in some real emotions and terrifying violence while acknowledging a supernatural element to Michael Myers which made a lot of sense given his apparent immortality. Green’s offering has no exciting kills, or inventive massacre, nor any shock factor. Rob Zombie’s versions are truly shocking, just as John Carpenter’s 1978 film was back then.

Rather pathetically, this Halloween even apes Zombie’s sequel in one scene. It capped off how lame the film is for me.

Am I going to watch recently released sequel Halloween Kills? Probably, because I’m a slag. Planned third film in this run, Halloween Ends, should be called Halloween Aborted and only released in Texas, before completion. Halloween only enjoys such a lofty score because there is some violence in it, which probably says more about me. 3/10