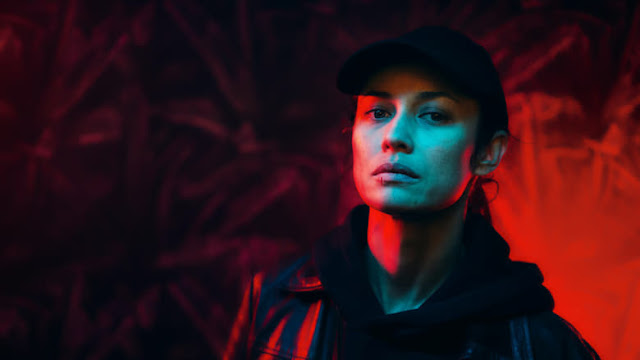 Sentinelle stars Olga Kurylenko as Klara, a French soldier home from war hiding some fairly severe PTSD. We know it’s severe because despite Sentinelle’s attempts at Euro-aloofness everywhere in the film, it is incredibly unsubtle at major plot points. As much guile as a kick in the cunt, which may well be the title of the sequel- Sentinelle: A Kick in the Cunt. Klara guzzles codeine like it’s an actually decent drug to buy illegally. Sentinelle tries to make Klara buying codeine in a back alley as nervy as Tony Montana hoping they didn’t pack the chainsaw. It doesn't work.

Two things. One, I ran ahead a bit of myself in this review but not to spoiler status so don’t worry. Two, it may have sounded like I advocate drug use. I do not advocate drug use, I advocate appropriate and sensible drug use. Both in the real and storytelling world. You do you, I just like wine these days. We’re supposed to believe Klara has an issue because she chews codeine like a fucking cowboy with a mouthful of tobacco? Please. If you want brilliant Euro drug dependency see Bullhead*.

Klara’s time in combat as a translator is shown briefly at the start of the film. She translates Arabic into French. I can say “hello” and “my name is” in Arabic, and in French, which doesn’t sound like much but Eminem made a career off “Hi, my name is” in English, his own language, so don’t knock it. I could be the next big thing.

From the off, Sentinelle feels like a film which blew its wad on Olga Kurylenko. By wad I mean budget, naturally. I do like the feminine play on Sentinel for the film’s title, it is the cleverest part of the entire experience; that and I was watching a film I’d never heard of beamed from my phone to a TV the size of some hotel rooms. In subtitles. For 80 minutes I was multilingual and performing televisual magic my Grandad would have shit his pants to see, even before he did that just 'cos. Technology eh. 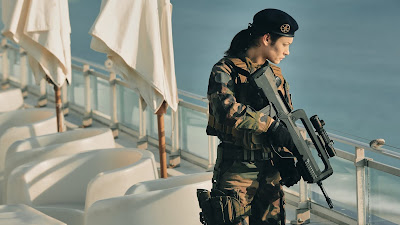 Klara is dangerously thin, which isn’t a criticism of that body type at all, just that it isn’t one which convinces me she can fight off two huge men. To put the shoe on the other foot, if it was a military trained bloke her size against two female goons with the proportions of the ones Klara beats up, I wouldn’t believe he could win that fight. Further, for an 80 minute movie Sentinelle has a very slow set up. It better pay off, I thought. Knowing it almost certainly wouldn’t.

Where’s a beautiful beast like Gina Carano when you need her? Oh, yeah. Boo Gina with your having an opinion people don’t like when everyone has to conform to this day's opinion. Especially being so un-woke when working for Disney, where they don't have anything of a chip on their shoulder when it comes to Anti-Semitism. Mousewitz and Duckau, look them up. My point is, Carano would have been great in this role, but the film would still be shit because Olga ain't the issue.

I’ve gone wildly off piste, I just find this world contrary sometimes. Maybe I like that. Anyway, back to the far more palatable Netflix stuff.

Sexual violence, Netflix warned at the start. Which is perhaps a worrying follow on from the last paragraph but Sentinelle is a French film and as such there is a good chance Netflix confused sex and violence as sexual violence. Sex and violence are two different entities; in France they like to fuck with everybody else’s perception of that just for fun, I think. See Raw and Trouble Every Day.

Sentinelle involves but doesn't depict sexual violence but then has explicit sex and explicit violence, separately of one another. I’d love to say it’s a delicate balance but it really isn’t. Sex/ violence/ rape. These should not be difficult to discern between. The depiction of them on screen even less so. I didn’t look at Sentinelle’s IMDb page before I put it on and almost immediately worried it was a bad call. However, I continued without checking because I’m stoic like that. And couldn’t be arsed.

My laziness is cursed. Sentinelle makes another French revenge film, cleverly called Revenge, look intelligent, classy and high budget. That is not hyperbole. See neither of them, but if you have to see one see Revenge and try to choke on nachos as your pennance.

Sentinelle benefits from a couple of good moments in the fight scenes, but certainly not enough to make you sitting through the film worthwhile. Nothing new, almost nothing good. 4/10

*I need to review Bullhead

I like writing reviews of films, even when I think the film is shit, because I hope you enjoy the review. Here's more!..

THE LIGHT BETWEEN OCEANS