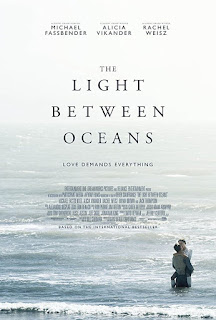 Tagline: “Love demands everything” Not sure I get it. I suppose I'll find out when I watch the film.

Premise: That lighthouse won't look after itself, you know! Neither will that abandoned aquatic infant!

Delivery: I'll start at the beginning, because I won't finish at the end. I bought The Light Between Oceans because I thought it would give the blog some balance covering a love film, because I like The Fass, and mainly, because it was cheap. After weeks of my ignoring it, I finally put the blu ray in, pressed play and braced myself, aware I might have to “feel” something; which my therapist always tells me is a good thing. It played: my first disappointment.

For reasons beknownst (if you can have unbeknownst, you can have beknownst, Ok) only to himself, The Fass goes to lighthouse sit for a while and simultaneously gets all pally with some lass from the shore. I like the Fass, but he plays Nauseating Man rather blandly. It was worrying to me that I fancied him more than Alicia Vikander (who plays Nauseating Woman quite annoyingly), which is to say not very much. Anyway. They get married after meeting twice and swapping some letters, which is basically the same as tying the knot after the second Tinder date. Then moving to a lighthouse. Madness.

Some of the pen and ink foreplay is a bit vomit inducing. All TLBO was making me, “feel”, was bile creeping up my throat. Only twenty minutes in and I knew I was going to need a really violent horror film to cleanse my pallet and restore equilibrium afterwards. The first half an hour of the film is just these two main characters flirting and fucking, barely any other characters get a look in. It's really quite annoying and drawn out as in that half hour I'd grown to care about them not one bit. I have a persistent ingrown hair in my neck I'm more fond of.

Saving Private Ryan is famous for its opening battle scene, forty five minutes of relentless carnage in bone shattering detail as the real life Normandy landings play out in close to real time. During the first forty five minutes of TLBO I found myself picturing Omaha beach like it was my happy place. My mind wandering I even started thinking I quite like the idea of buggering off to live on an island for six months. All I'd need was six months supply of food and twelve of whisky. It'd be a doddle!

Fifty minutes in and I'm starting to think Vikander ain't a great actress. I'm also starting to think me constantly wondering how long it's been cannot be a good sign. TLBO veers between sickeningly lovey and quite horribly sad, only I don't care enough about them for the sadness to grab me and want to see it get better, or even what it leads to. You can probably guess where this is going but my notes then read, “Right I don't give a shit. I'm sorry but it's going off. The Fass and Alicia's happiness will be my filmic Schrodinger's Cat. Tatty bye!”

Bedsit it? I didn't make it through, which is very unusual for me. What I saw I hated though, if that's of any help. As it turns out love demands everything, but cannot command my attention for two hours. If anybody reading this wanted to see the film, and still does, get in touch and you can have my copy. I'll post it to you for free. That can be the good to come of this.

It might be unfair of me to score this, only it's my blog and I literally WROTE THE FUCKING RULES so an emphatic 1/10