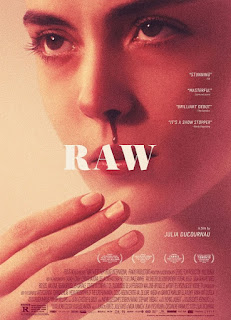 Tagline: “She Craves Meat.” France, birthplace of the double entendre.

Premise: Justine is a lifelong vegetarian, and off to veterinarian college where her sister is an older student. As part of an initiation task she is forced to eat raw meat (a rabbit kidney), the effects it has on her are severe, and gruesome.

Delivery: Before I delve properly into Raw, I want to touch on what I read in several reviews of the film. The initiation (hazing to Americans) ceremony where Justine and the other new students are made to eat a rabbit kidney, many reviewers described as, “bizarre”. Now, I don’t know if these reviewers have ever been to University, but eating a raw rabbit kidney sounds like exactly the sort of thing veterinarian college seniors would make newcomers do. If anything, it’s the least shocking part of Raw. I’d even swap it for my Derby Uni Rugby initiation. I’d have skinned the rabbit myself and eaten the carcass whole over trying to nail a pint, thick with the vomit I’d just seen Belfast Ricky unload over the table of beers, before, “chewing the poo” and finally vomiting myself (in the bin provided). That was just our pre-drinks.

French cinema is brilliant. Just like everything else with the French, they don’t give a shit about what the world thinks and that is both admirable and a fertile breeding ground for creativity. Particularly their horror is and has been inventive and visceral for about the last fifteen years. The Ordeal, Switchblade Romance, Inside, Martyrs and Frontiers are all films to seek out if you haven’t. By way of creative contrast look at Britain, cinema here is lauded in the press by rooting it in, or tying it to reality. “The show needed for Brexit Britain”, “Perfect Trump era cinema” are just two examples I made up, but you get my point. We like to associate ideas to reality, but creativity exists separately of reality, and once you find that other place, you can have some real fun.

Raw is very much a film which feels like someone was having fun creatively, and is one of the most unique and brutal films I’ve seen in a while. I’ve seen real life operations up close, smelt necrotising fasciitis and watched more horror than my niece and nephews have Peppa Pig episodes combined. However, Raw turned my stomach and made me feel deeply uncomfortable like nothing else. Not since Bullhead (also one to seek out) has a film had me so enthralled and on edge at the same time. Of course, this being a French film about cannibalism and female students, part of what made me uncomfortable was being unsure as to whether I was sickened or aroused. Or both.

There is nothing schlocky about Raw, there are no jumps, no night time scares really. Most of the horror is in daylight. A week after watching I’m still trying to work out what it is about deep down- the whole film feels like it’s making some sort of point, and again, being a French film it is probably a lofty philosophical one. Perhaps something about feminism, or vegans? Maybe the director, Julia Ducournau, simply thought it would be funny to make a body horror which is so stomach churning and simultaneously littered with naked women and crotch shots she’d have people not knowing whether to reach for a bucket or the Kleenex. Any of these is a good enough reason for me.

Bedsit it? Ahem, this probably says quite a lot about me, but I loved it. I’ve lent my Blu Ray to someone before checking whether there was a making of, but I want to find out what the hell it was all about. Although at the same time it doesn’t matter, because I enjoyed the ride, and sometimes that’s all you need. A warning, though, whether you enjoy Raw will depend largely on the strength of your stomach. 8/10
Labels: Bedsit Bedsit Cinema Body horror Cannibal Film ratings Film review France Gore Horror Movie Nudity Raw Subtitled Thriller