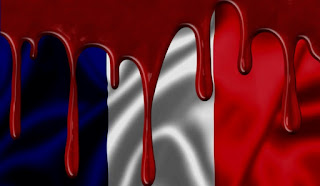 I'm no cinephile historian. This will not be, and does not claim to be, a run down of the mould breaking, genre altering, pioneering cinematic achievements from our French friends. I'm also not claiming this list is definitive; I don't know everything, I haven't seen every French horror film of even the last twenty years. There's a gap between 2010 – 2016 which is bugging me. I must have been drunk. So please, please leave suggestions for me to watch and let me know your thoughts. But please, please be aware that I am very insecure and may get defensive and rude. Hey, I'll try and be nice though, you fucking know-it-all.

Particularly since Trouble Every Day introduced a very banal wickedness, a human element to their horror*, the French have run with a very existential and misanthropic approach to the genre, whilst over time adopting and adapting some more traditionally Hollywood elements (not always to good effect, it must be noted). Gore. Gristle, blood and misery abound in France's basement. Nihilism, despair and the nightmarish losing battle against death are ever present, though in varying styles.

The French sense of humour shines through, too; particularly the incredibly dark and odd humour of The Ordeal is one which I enjoy. The Pack and Frontier(s) have an anarchic sense of irony in their depravity, and there is a Gallic nonchalance potent in their other horror films. Please enjoy this little list of my favourite French fright films since 2000.

I have given each film a score out of ten on the Francometer, which I just made up, measuring the pungency and pervasiveness of each film's French core. Ten being the most aggressively Gallic, and thus best, score. Although all of these films are worth your time, some are less French than others.

Bedsit Cinema received no money from Philippe Nahon or his agent for this list...

This Vincent Cassell (yay!) starring, action, adventure come horror was the first I saw on this list, and also one of the first foreign language films I watched repeatedly. Monica Bellucci also features (double yay!). It has a creature feature, fantasy element and is a good fun bit of cinema with some martial arts bizarrely thrown in for shits and giggles.

While a good film, Brotherhood of the Wolf is a bit Hollywood and not very scary. A mild 2/10 on the Francometer.


Claire Denis' Trouble Every Day is often cited as a masterpiece. Maybe it is. It's certainly fucking weird and unique: although not the only film involving Vincent Gallo and human flesh being gobbled explicitly (Brown Bunny). This is a sexualised film about the joys of eating people which certainly had a knock on effect for French horror.

It isn't my favourite on this list by some stretch, but you can't argue that it's all very French. A sexy, disgusting, 8/10.


Features a serial killer orally satisfying himself with a decapitated head. I'll leave it at that.

A fetid, savoury 8/10 with added respect for being the only French film to feature Muse, ever. Muse don't sell outside of Devon you know.


So bonkers I'd be doing it a disservice describing the oddball anarchy it dishes up. But seeing as I love dragging everything into the gutter with me, imagine The League of Gentlemen forgot to put any jokes into the show. It's not funny, but it isn't not funny either. Technically a Christmas film, too.

One of my favourites on the list, The Ordeal is a running-away-from-the-cheeseboard, ripe 9/10

It's a good film, just not uniquely French. An easy on the pallet 3/10.


Home invasion horror you say? Pregnant woman harassed by crazy lady? Gorier than anything your worst nightmare could conjure? Ladies and gentlemen, I give you Inside. A film so brutal you'll need a sick bag. It's brilliant, and much of it is so close to being unacceptable only the French could pull it off. The Americans have remade it of course, and I can categorically tell you it's shit, don't bother. I haven't seen the remake, I just know these things.

A sickening, mouldy 9/10 which sticks in the nose and on the clothes. You'll love it.


Frontier(s) has so many storylines when I was trying to think exactly how to describe it I decided to settle on: neo-nazi, mutant, hostage horror. It is off the wall, bloody, and excellent fun.

Revenge, torture, unbearable suffering, this scores highly for the pungent existentialism and nihilism which ooze from its rind and grab you by the throat. 10/10 on the Francometer.


That the Americans have dubbed The Horde and hired that voice-over guy to explain what you're seeing in the trailer like you've returned to the nineties and been lobotomised, tells you a lot about the film. It's not bad at all, in fact it's goofy, zombie survival fun with lashings of violence and gore.

However, like cheese from a can, this has the USA stamped all over it. 1/10

Much like The Horde, Mutants is a zombie-style horror with a little more Gaul about it. A pregnant woman and her partner hide in an abandoned building, trying to remain sane and safe as the terrifying, infected outside world closes in on them.

Well worth a watch, and a respectably robust French flavour. 4/10


The Pack is yet another featuring Philippe Nahon; the fourth film on this list to do so, and it would be higher but I don't count Irreversible as horror and Humans is shit. This is crazy werewolf territory with a lovely spin and some dark humour. It's a good film to watch with a few beers and some mates.


Ahh, Raw, which was on my list of films I knew I had to see but hadn't got round to yet. Well, I saw it and fucking hell was I glad I did. A vegetarian goes to veterinary college, is made to eat rabbit kidney as an initiation, and starts craving human meat- all with added sex and some stomach churning scenes of cannibalism.