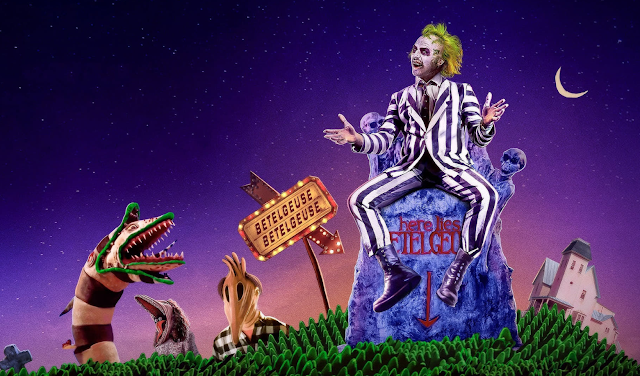 “In This House… If You’ve Seen One Ghost… You Haven’t Seen Them All.”

How many people, tribal, camps of people, fought it out to conflagrate this disjointed ectoplasm? It reads like a stroke victim’s last words as transcribed by a YouTuber.

A young but ever so slightly dull couple die and encounter the colourful, dangerous afterlife, a demented grifter, all the while fighting the destructive, deluded living.

In the long long ago my mate had a Beetlejuice toy. It was a coffin. We were under ten and the film is for older people, but just like the Terminator one he had it was fucking cool and I yearn for those days. Nostalgia, it's one hell of a market.

A young Geena Davis is someone I have a severe crush on. Before you call me ageist let me just say, attraction is aspirational, fantasy; time ain’t the reason Geena Davis isn’t dating me. A young Geena Davis and a young Alec Baldwin are pretty on point as the recently deceased but bland Adam and Barbara, who still have natural teeth. How Hollywood has changed.

The couple obviously represent goodness and simplicity and in contrast to the vile, pretentious pseuds who buy their domicile they are certainly easy to root for. Once they’ve kicked the bucket Tim Burton’s oddball brain really takes root and sandworms, cigarette smoking corpses and most wonderfully Beetlejuice enter their post life. Oh, and the living. The living rock up, wrecking every wholesome element of their former existence with their gaudy, fleeting crap.

By way of commentary, styles have changed but the point remains the same; people are largely fickle and focused on garnering attention. I’m not cool, but I still want you to like me. Beetlejuice folds satire and caricatures into its cartoon, which carries a macabre swagger. Michael Keaton’s supporting malevolence, the titular Beetlejuice, is really the crux of it all. He’s mad, bad and all kinds of #MeToo. But he’s also somehow comedically loveable.

Is Beetlejuice Michael Keaton’s finest performance? I suppose that depends on how much you engage with the undead pervert he portrays. He’s certainly unique, and the conflict at the heart of the story is which is the lesser of two evils: living or dead. Beetlejuice steals the show with minimal screen time and elevates the entire film. The practical FX play a part, too; for me they've aged charmingly, their skill timeless unlike much CGI.

Is a sequel coming? Beetlejuice 2 was announced around the birth of IMDb it seems, and perpetually in production purgatory. Which is at least appropriate. I’d like to see it, to see what they have left in the idea. If ever there was a film which suitably straddles the adult/child appropriate border, this is it.

Supposing surreally unusual possibilities for the afterlife, most terrifyingly a bureaucratic nightmare worse than death and the horror of populism overwhelming values, Beetlejuice is hitherto unrivalled. No matter how hard Tim Burton tries to revive this bride. As a film it does not overrun, though my one criticism is that despite repeat, enjoyable viewings, it hinges on Michael Keaton.

Splendidly colourful, stupidly weird and bizarrely scary; there’s nothing quite like Beetlejuice. While the point is that Beetlejuice is the film, what prevents a ten is that the other actors don’t offer much past good. I’ll always rewatch the film because Beetlejuice is an iconic character, and I love Geena Davis’ ghost. 9/10