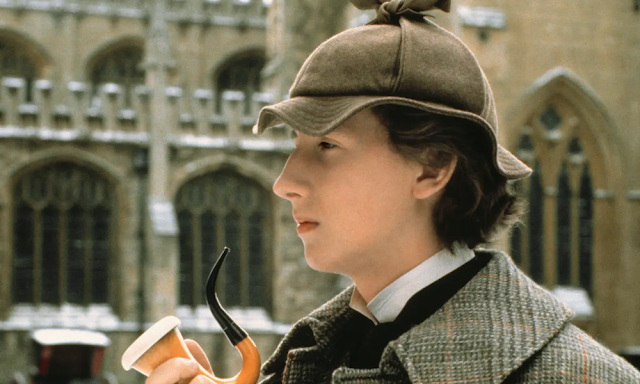 Regular readers will know I’m a fan of 1980’s children’s films (see Return to Oz, The Dark Crystal reviews). This is because they’re so much darker than most of today’s pandering guff, and possibly also because I was a child in the 1980's. I had a particularly vivid memory of one depressingly adult moment in Young Sherlock Holmes that when watching as a child really upset me. Of course that traumatic memory is precisely what brought me back; I’m a misery-slut.

Young Sherlock Holmes was made by something of a dream team of cinematic talent. Barry Levinson directs, Chris Columbus wrote the screenplay and Frank Marshall and Steven Spielberg produce. George Lucas’s VFX company Industrial Light and Magic (ILM) did the groundbreaking computer generated effects- the film boasts the first completely CGI character ever and for a thirty six year old piece of work it has stood the test of time excellently.

There’s plenty of practical effects in Young Sherlock Holmes too, and the very first scene really sets the tone with some surreal, freaky goings on. I can’t help but think the film must have been a lot of fun to make. I don’t know if I’d call it scary, perhaps it would be for children, but it is instantly fun. The story concerns Holmes befriending new arrival Watson at some posh boarding school. The two, and love interest Elizabeth, become entangled in a series of mysterious deaths. 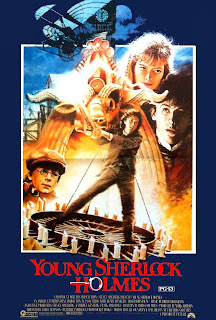 In the 80’s Young Sherlock Holmes probably felt a lot more fresh than it does now, but I certainly loved it as a child. The intrigue fades as the film goes on though and It all gets a bit silly towards the end, but then I’m a jaded thirty seven year old, not a bright eyed kiddywink.

Because he’s “young” (he’s supposed to be about eighteen I’d guess) Holmes isn’t a skag-head yet, but he is already very annoying. An irritating know-it-all. They should have given him some smack, liven the film up a bit. Although as much as I’m all for a gritty kids film, watching a teenage Sherlock Holmes descend into a Requiem for a Dream like nightmare of opioid addiction is probably a bit much for the under tens. Sherlock solves the mystery of the collapsed vein.

Young Sherlock Holmes does also feel a bit Harry Potter, not least because Watson quite literally looks like Harry if the young wizard let himself go. Harry Potter and the all you can eat buffet. Obviously Young Sherlock Holmes precedes Harry Potter; I wonder if J. K. Rowling has seen this film. I bet she has. Hilariously there’s a disclaimer at the end essentially apologising to the rotating corpse of Arthur Conan Doyle for taking liberties with his characters.

Ultimately fades down the stretch but the wonderful effects work kept me amused and content. Young Sherlock Holmes is certainly worth a go if you’ve never seen it before and I’d be interested to know how today’s kids engage with it. 6/10

Are you after adventure? Try these reviews!...