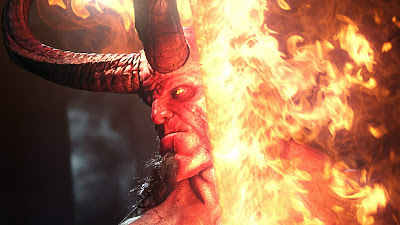 While I’m a massive fan of Guillermo del Toro, I’m also a fan of Neil Marshall- The Descent being an all time favourite of mine. Only fifteen years (shockingly not that long when you're my age) on from del Toro’s first Hellboy film, Marshall’s more violent version swept in with middling reviews and lots of poo pooing. This is the Bedsit Cinema though, and the promise of violence, humour and gore, as well as some poo poo had me engorged.

What to make of this new Hell? First up, the London setting is fun, being from London myself it's nice to see it destroyed by mythical beasts; a fantasy I've played over and over in my mind while commuting.

Marshall's Hellboy has a wandering aesthetic which feels very much like a comic, I imagine. I’m 35 and have never read a comic, but I do have a fairly good imagination. Comics are like a story with pictures for geeks, right? Incidentally, don’t ever, ever talk to me about a “graphic novel”. A graphic novel is The Killer Inside Me. You read comics, and while it's fine to look at comics, don't pretend it's grown up by renaming it.

Yes the dramatic side of the film falls flat on its arse, but it is important to remember that this is a film about a bright red, giant devil with a gammy arm who fights a dismembered witch. Some perspective is needed. I didn't go into Hellboy expecting more than action and entertainment and nor should you. For me, the film delivered quite comfortably on those criteria.

The 2019 Hellboy is so bloody and violent that it did make me wonder what you have to do to get an 18 rating these days. I'm not complaining about that though- when I was fifteen I’d have loved this. All I got in 1998 was The Thin Red Line, a war movie which, while absolutely brilliant, was an almost bloodless 15 certificate by comparison. One of the best scenes in Hellboy where he fights giants is pure Wrath of the Titans (a film I unashamedly enjoyed) action.

In places Hellboy is deliciously, knowingly creepy; I liked that about it, having a pure terror element is definitely down to the director.

The action and horror are well handled as one would expect from Neil Marshall and the humour is still funny, despite not being new to the Hellboy films. I was laughing throughout and you can't ask for more than that really. This won't be a popular opinion (in Liverpool) but I love that the hideous, stupid boar beast is a Scouser. Liverpudlians with their famous "sense of humour" will really bond with that, given that their heroes are Steven Gerrard and Wayne Rooney.

Hellboy has more fun in it than your average Marvel* outing and David Harbour is a very good Hellboy. Very good indeed. Let’s face it though Ron Perlman is the only on screen Hellboy, sorry Dave.

Bedsit it? Neil Marshall’s gore-ific Hellboy’s biggest problem is that it comes fifteen years after an excellent film from the same source material. I don’t think we can blame Marshall for that, because he serves up a treat. It does make me lament that studio greed and lack of imagination is crushing originality however.

For me that’s what hurts the most about Hellboy, I have few complaints about the film as entertainment. Solid 7/10.