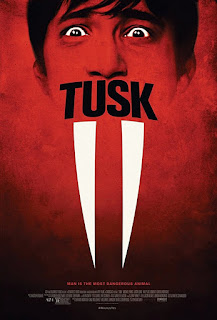 Tagline: “Man is the most dangerous animal.” I dunno, I had a pretty bastard hard pet rabbit called Buster when I was a kid. But then, Watership Down... Man it is.

Premise: An annoying podcast personality (Justin Long) travels to Canada, where he has to improvise for a story after his planned scoop expires. He meets a very strange old man, with a love of the sea.

Tusk is directed by the inimitable, and lucky to still be alive, Kevin Smith- the man behind Mallrats, Dogma and Jay and Silent Bob (Smith plays Bob). He's become a bit of an American Michael Winterbottom of late, trying his hand at different genres, mixing it up, messing with the playbook* and achieving some success. Though not total. Tusk has a 5.4 IMDb rating, but I don't go in for that, I loved the premise and wanted to see it. Smith's Red State is well worth a watch, too.

Tusk's cast is on good form, Justin Long is convincing as thrush: an irritating cunt. Haley Joel Osmond shows up to remind us he's still alive and not as cute, though like Long, actually pretty funny. Johnny Depp also appears, trying out a convincing French Canadian accent. But Michael Parks is the show stealer. Is Michael Parks ever not good? He's again brilliant in Tusk as a lonely soul, who in Long's Wallace meets a man who has changed without knowing it. Wallace has been slowly isolating himself, but when he meets a truly isolated man things get worse.

The film is creepy as all living hell, and simultaneously an actual living hell for the characters. Tusk is not always an easy watch, and is very "out there". There are moments of comedy and some good dialogue scenes, but the horror is stand out. When you let someone with as dark a sense of humour as Kevin Smith take on the horror genre, it was always going to have absurd leanings. The common saying “you couldn't make it up”, was proved to be bullshit long before Boris Johnson's very existence, let alone achievement, made mockery of it. Tusk saw BoJo, and raised it. It goes from mad, to bonkers, sails past the Tory administration, without dismantling the NHS, and ends up being crazy, confused and contrarily caring.

A lot of Tusk is about relationship dynamics and intimacy, but an awful lot of it is about grossing you out, too. It is not a film without a soul, Smith cares about his characters, that is obvious; and for me makes the film.

Bedsit it? A second viewing loses the shock, and the shock is a big plus for the story, but the horror, humour and sheer originality remain. It's not on Netflix but you can pick the Blu Ray or DVD up pretty cheap now. I really enjoyed it. 7/10

*MOOSE JAWS SOUNDS LIKE THE GREATEST FILM EVER! But then so did Zombeavers.