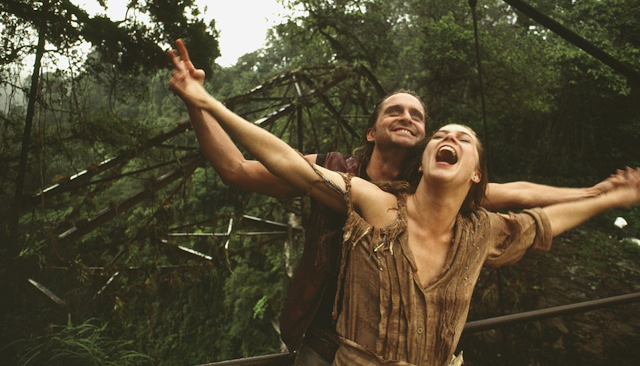 Valentine’s Day is an irrelevance to me even when I have a girlfriend; which might go some way to explaining why I don’t have a girlfriend. I’m a hopeless romantic, in that I’m awful at it. Because of this I have never, despite having reviewed plenty of lurve films, specifically written a Valentine’s Day review. Well, dear reader, 2022 is your lucky year because I have done.

Romancing the Stone isn’t actually listed as a romance on IMDb, but it literally has it in the name and it’s my website and my rules so it counts. I have no idea why it appealed other than it being on Disney + and looked fun. Also, when the main character’s elderly neighbour, struggling up the stairs with groceries said, “I never get in an elevator, y’know, rapists” I thought this might be a more edgy effort than it appeared.

Michael “Cigars and cunninglingus” Douglas is an intrepid, grumpy and rugged explorer a la Indiana Jones (only better at oral sex) and Kathleen “Chandler’s Dad” Turner is a city girl way out of her depths and completely unlucky in love. They are thrown together in the jungle as Kathleen attempts to solve some sort of gang situation her sister (I think) is caught up in. Danny DeVito also appears and I honestly can’t see him as any character other than Frank Reynolds now. It is his defining role for me.

If it all is starting to stink like a fetid carcass in a swamp, that’s because Romancing the Stone is as horribly formulaic as it possibly could be. I genuinely think the elevator pitch was just “Indiana Jones eats pussy” and what’s worst is he doesn’t even eat any pussy. On camera anyway. Talking of smells, someone was making food in my house, and Romancing the Stone soon became What’s Cooking?. 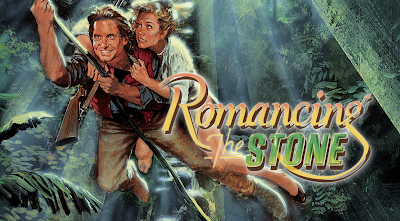 Burgers, was my first bet, but it was a little too early for lunch so perhaps some kind of prep for a mouth-watering meaty meal later in the day? I cared more about that meal, which both was and wasn't a burger until I went and checked, than whatever was going on in the jungle. The deceased beast was now a philosophical conundrum: Schrodinger's Fat. What if it was a stroke? A delicious olfactory brain attack. Just as possible, probably less romantic than a burger.

I dated a vegetarian once.

Seamless segue back to Valentine's Day- great work Adam. In the film, #checks#, Romancing the Stone which has Michael Douglass and oh yes we’ve done that… Someone gets their leg bitten off by a crocodile. I don’t know who got chomped but clearly the reptile was watching too and also got hungry and bored. Full credit to ol’ croccy, it livened my interest up no end and was appropriately appetite whetting.

Romancing the Stone, just to remind you that it is a romance film because there’s no clues in the title or the love story or all the delicious, sexy beef sweats it elicits in the viewer, has some classy cheesy Eighties saxophone music at the end. I think that might also be literally everything I can tell you about Romancing the Stone. Happy Valentine’s Day.