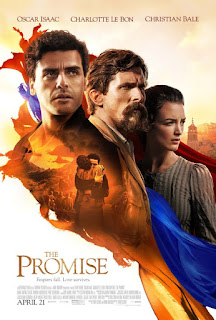 Tagline: “Empires fall. Love survives.” If I had seen this before buying the film I probably would have put it back on the shelf. But we are where we are.

Premise: The Promise is basically a love triangle story, set at the start of World War One, in Turkey as the Armenian genocide begins. There's an Armenian doctor, Mikael, played by Oscar Isaac, an American journalist, Chris, played by Christian Bale and the woman they both love, who while very lovely and caring as far as I could work out lives off her rich parents, Ana. She's played by Charlotte Le Bon.

Execution: I am not a history or geography buff. Anyone who's read my school section in The Dead Are Coming (plug, plug plug!) will see that I didn't exactly think the most of my teachers, not that any characters in that are based on real teachers, of course. The ramifications of this utter apathy toward learning echo in my lack of knowledge today. As an ignoramus, I knew basically nothing about the Armenian genocide. Which ironically is exactly the way the Turkish government wants it. Even now they deny the killing of one and a half million Armenians, and there was a concerted effort to have this film not made, then to ruin its reputation by voting it one out of ten on IMDb. Pathetic.

Back to the film itself. I must admit I find Christian Bale annoying, but I can't decide if it's because of the lights fiasco on Terminator: Salvation, rather than his acting, which is usually moderate to good. In The Promise he's alright, Isaac is good and Le Bon more than matches him. The film got a 12 rating for Blu Ray release, but the violence and horrors are not scrubbed clean or glossed over, it's really rather affecting. As it should be, given the subject matter. Director Terry George also directed Hotel Rwanda, which was similarly expressive of humanities horrors with a 12 rating.

The Promiseis definitely an epic. The story sweeps across Turkey and back again, it has an eclectic cast (Jean Reno! Tom Hollander! Tamer Hassan!) and the large scale battles and early 20th century city-scapes are expensive looking and believable. Yes, the story is a love story set against a genocide, which I find trite and trivial, but it is well told enough that it isn't outright offensive. Worse handled it would be. I did end up caring for the main characters (Bale's less so) and the Armenian people particularly.

Bedsit it? The Promise is not a film I'd watch unless I was in the mood. I must have been in the mood, however, because I sat through it, engaged with it and was moved by it in places. I'm a sucker for a well done love story, too, and mostly this one was believable. The horrors of the genocide much more so. Even as a film which wouldn't normally be my cup of tea, it's a 7/10. If it sounds like something ordinarily you'd love, you might score it higher.
Labels: Armenia Bale Bedsit Cinema Cinema Drama Film Love story Movie Rated Romance Turkey