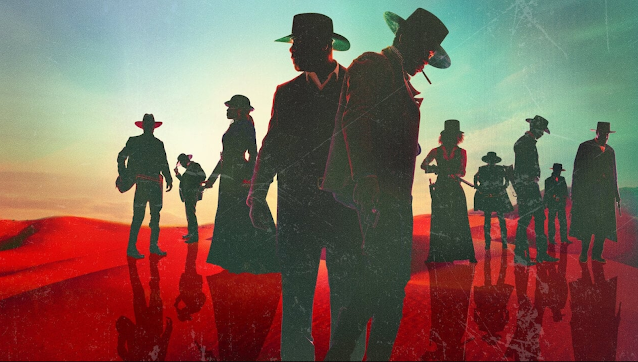 New to Netflix, The Harder They Fall promises some highly stylised western action a la Django Unchained. At least, that’s what I inferred from the trailer for it, not knowing anything of Director Jeymes Samuel or much of the cast past Idris Elba, Delroy Lindo and Damon Wayans Jr.. This is a western with a mostly black cast which largely doesn’t dwell on that fact. Although there is racism, of course there’s racism.

With colourful carnage and some great, catchy contemporary music use, The Harder They Fall feels snappy and stylish from the off. I said colourful, which given the context made me think, but a film of colour sounds worse.

The Harder They Fall is Blaxploitation, but without the ploitation. I think? It’s more a black celebration, given the talent involved and clear reverence for its roots. I’m all for that and sadly there is a part of me, a big part of me, that thinks the initially very low (now creeping up) IMDb score might have a reason behind it, and it isn’t the contemporary music. Some people just don’t like films where it’s a majority black cast and isn't a film about slaves. There is a name for these people.

Moving swiftly past the cynical score targeting (a real problem on IMDb) of certain cinema- the story opens with a rather nasty event and then jumps forward. Instantly highly violent and flashy, as time went on the story started to take a back seat. Director Samuel really throws every trick in the book at The Harder They Fall’s visuals: split screen, arty close up, flashy palette and more. It started to feel a little bit like a kid trying out all the Instagram filters to the point of nausea. 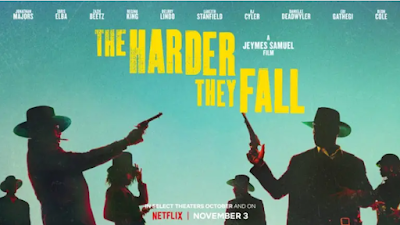 The characters are all written to be so cool that really I didn’t feel anything for any of them, they were all interchangeable. I also struggled a bit with what, after a good start, had begun to feel like a bit vague and/ or uncompelling story. I’ll admit that a very busy work life probably wasn’t helping me function as a viewer as well I might. The Harder They Fall isn’t exactly a thinker, though. I settled with the age-old philosophical approach, accepting that when it was up it was up, and when it was down it was down.

I like the violence but I need more than that and an overbearing style. Perhaps you do too. But when it was only halfway up it was neither up nor down.

Starts well, ends Ok, wavers massively in between and is highly unlikely to impress people who aren’t sure they want to watch it. However, The Harder They Fall feels somewhat like a film I’ll enjoy more another time. Entertaining overall, despite its erratic presentation. 6/10

Bedsit Cinema loves a Western. Check these reviews out!..