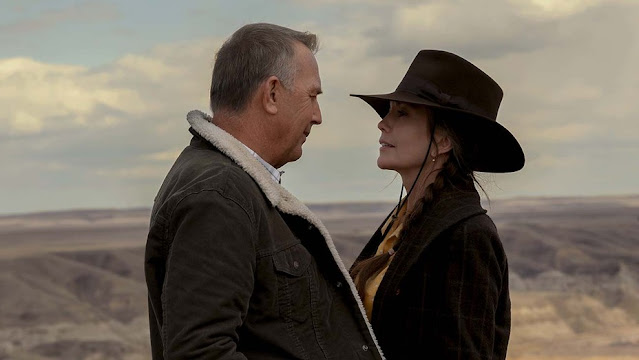 Although there is a tragic death (not a spoiler) at the very beginning, Let Him Go has a very gentle start. Set in Montana in the late fifties, Margaret (Diane Lane) and her husband, retired Sheriff, George (Kevin Costner) head out to locate their toddler grandson. The boy has been whisked away under a cloak of suspicious darkness by his mother and her husband. Montana looks pretty cold for the west, but my geography is terrible so I looked it up and it borders Canada, which is famously pretty cold.

Margaret is the driving force behind the couple’s mission. But as things become more obviously heading for danger she is a clash of belligerence, naivety and unfailing politeness. She’s a very complex character who in places infuriated me, but is also easy to relate to. George, however, is quiet, along really for support and largely lets his wife take control.

As the plot evolves, there is a wistful, romantic air that slowly broods as the film ticks on. Let Him Go also has a gentle, emotional soundtrack of guitars and other strings, reminiscent of Unforgiven- in a good way. The brooding becomes more intense, slipping effortlessly into foreboding. Foreboding then becomes ominous, ominous turns into threat and I’m sure you get the picture. The couple’s search is headed nowhere nice. 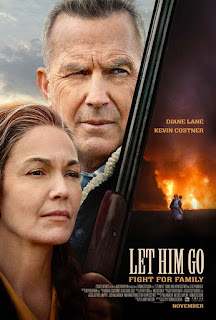 When Margaret and George run into the antithesis of their love and care, violence does come (to town) and when it did I almost breathed a sigh of relief. The reason for that exhale, is because preceding the action Let Him Go is brilliantly, unbearably tense. I mean really threatening and scary without the need for brutality. I couldn’t stand the unknown anymore, I needed things to boil over for my own sanity. In that sense it was thrilling, intense. You'll feel it all, and realise you're breathless.

It is all nicely shot, and Let Him Go’s director Thomas Bezucha paces the film brilliantly, somewhere between a slow burn and classic, showdown, western. This is great cinema. Diane Lane gives a powerful performance, Lesley Manville and Jeffrey Donovan are both terrifying, while Kevin Costner can play this kind of role in his sleep.

The finale is brilliant, but Let Him Go’s very ending ever so slightly annoyed me, however I think I was nit picking. A beautiful film about family, grief and envy.

After I’d sat on the ending for a while, it irked me less. Let Him Go is superb, a nice surprise to me which I highly recommend to you. A continuation of a rather excellent 2021 films in my little Bedsit Cinema. 9/10

Want more from the west? Of course you do, try these reviews...

A MILLION WAYS TO DIE IN THE WEST

THE QUICK AND THE DEAD