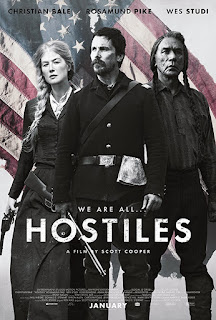 Tagline: “We Are All Hostiles” On the money.

Premise: Christian Bale plays Captain Joseph J. Blocker, a somewhat legendary if grizzled and damaged soldier who is approaching retirement. Stationed in New Mexico, he is tasked with escorting old adversary Chief Yellow Hawk (Wes Studi) and his family back to their home territory in Montana. Unsurprisingly Blocker is unhappy about this, but tensions must be put aside on their trek through the dangerous wild west, can they do it? Who will survive, is a better question.

Delivery: Westerns are one of my favourite genres, and Hostiles is a western not in a showdown, gunslinger way, but of a more thoughtful, though no less violent ilk. At a push I'd pitch it somewhere between The Homesman (with Hilary Swank- worth a watch) and Oscar winner, The Revenant. Hostiles concerns itself with survival in a maelstrom of death. Very rarely do you see a western where everybody leads a happy life, free of danger, as A Million Ways to Die in the West riffed on so well. No really. Give it a watch it's a hugely underrated comedy.

Films which lament death are ten a penny at the moment, and there's a reason for that; we're all going to die. Soon, probably, once that overweight rotting orange in a wig and that chubby other cunt get their nuclear dicks out for World War Wang. Until then, eat, drink and watch films about treks in the late 1800's. Safe in the knowledge that a nuclear blast would burn you into the ruins of your house in a flash, and the fear of waking up being scalped is somehow worse.

While the fear of death, actually dying, living once you've seen death at every turn, living with having killed everything that moves- lots and the presence or lack thereof of that old Bastard the Creator when all this dying is a-happening are the strongest themes, it would be unkind to say the Hostiles is only about death. Even if you had just spent two and a half paragraphs doing just that. We, the living, we forgive clumsy writing and treading on one's own prose. That's also a very strong theme, doctrinal, even.

Hostiles is a very deliberately paced film. Sergio Leone once said that Once Upon A Time in the West was deliberately paced and edited to have the feel of a dying man's breath. Hostiles made me think of that, there's an ebb and flow to the action, I'd call it tidal, consistent, you know it's coming. That, ladies and gentlemen is where I get to my point, criticism of Hostiles as being predictable is short sighted. It is predictable in many ways, and unpredictable in others. It makes no bones about the randomness of living and dying, or of the predictability of it sometimes.

Brutally violent from the start, and unapologetically poetic in places Hostiles knows what it is trying to be and isn't coy about it. I liked that. I also liked all the death stuff but that's just me and we'll delve into my psyche on Bedsit Cinema at a later date. This Friday, actually. The characters interact realistically, it is well acted, beautiful to look at and in places a very tough watch.

Bedsit it? Hostiles is in cinemas now and I really do encourage you to go and see it. While it'll look good on home cinema too, it's the kind of film which probably won't get the box office it should in order to encourage studios and independent backers to fund this kind of cinema in future, and that would be a shame. I went on opening weekend and it was in screen 20. Of 20. Worrying- I hope you all like remakes and sequels! Also, I went in HMV which is right by the cinema afterwards and they have no World Cinema section in it anymore. None. They had a superhero section which was about forty feet long. Think about that for a minute.