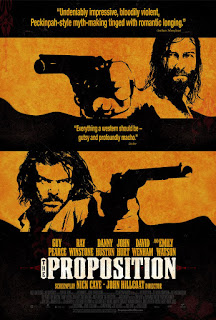 Tagline: “Three brothers, one must live, one must die, one must decide” Which actually is pretty good, I can't even think of a joke to make about it.

Premise: Err, see the tagline... Ray Winstone plays Captain Stanley, police officer in the outback, Australia. He's come over from England with his delicate rose of a wife, Martha, played by Emily Watson. Three local outlaws, the Burns brothers, are wanted for a heinous crime. Captain Stanley captures two, keeps one in prison and makes a controversial deal with the second.

Execution: I've seen The Proposition three, perhaps four, times. The first time I saw it I thought it was alright, entertaining but lacking in substance. That was ten years ago, I was young and naïve. I was also, wrong. The Proposition is exceptionally layered and has real depth, and that's just Nick Cave's brilliant script.

Often referred to as the film which brought the western back, while simultaneously reinventing the genre, The Proposition is quite straightforward, but just brilliantly, beautifully and brutally told. The outback and those inhabiting it are believably portrayed, and there's one scene which makes The Passion Of The Christ look tame. I am a man who likes my violence, and if you are of a similar orientation, you'll love this.

The score/ soundtrack by Nick Cave and Warren Ellis is exemplary, fits the era and never overbearing.


Bedsit it? If westerns are your cup of tea, or if you liked director John Hillcoat's The Road, this is for you. Preferably on a big TV and on Blu Ray. I love it. 9/10
Labels: Australia Bedsit Film London Movie Rated Ray Winstone Review Western