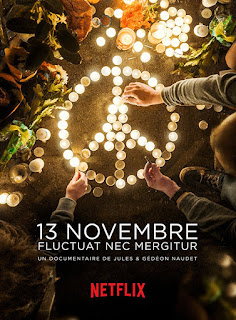 Premise: Three part documentary each an hour long on Netflix about the Paris attacks on 13th November 2015.

Delivery: “Images, sounds, smells that blend together in your mind to make a real mess."

Not a lot of people know this; only everyone who has ever met me since, and possibly some of their friends. But I once nearly died in a shooting. I was strictly a bystander, not the target (he looked pretty dead), but it's no exaggeration when I say that when the bullets came in to my side of the bus, my first conscious knowledge of them was the window snapping by my ear. Next to my head. All I had was confusion, loud metallic bangs, and at the same time an understanding. My biggest worry is that it will seem I am trivialising November 13, but to me it doesn't feel like I am. Something which very nearly stopped my life. Instantly. Violently and with violence around me. Yes, I'm a tart.

This is my small understanding.

The victims of the Paris horror you'd have to be nuts not to feel for. Understanding the dead, and seeing emotions swimming in the eyes of the living are two different things. People dying is often very impersonal; the survivors are the ones who haunt you. Their terror or acceptance is like a plague. Awful, destructive and somehow important. November 13 conveys the odd, serene, violent dichotomy of survival. It throws that horrendous shared experience in to a centra-fugue and spits it out as individually as the poor people who suffered though it; while doing justice to those who simply suffered, but not through it.

Phones ringing. It has to be the most heartbreaking modern symbol of a life lost: the inability to answer that fucking phone. Ordinarily so innocent, annoying perhaps, but now a damning indictment of a human's absence. A loss of life. Death.

November 13 is so loving, so well placed and just about the people. Those people provide slight scenes of serenity, tiny slithers into the mindset of atrocities otherwise alien, so out of reach. The smallest human touch meaning more than a loving hug; two fingers clutching as those around you die. It's one of the most moving things I've seen in an age. It's why I'm writing about it, despite it not technically being a film (three hour long segments on Netflix). Although I felt some connection, November 13 is not about a random shooting in Old Kent Road, this is, as one survivor explains, people, “here to kill everyone”.

It's not even remotely a “what would you do” story, because, as you hear the victims you know full well you'd have been at your most brave to do half what they did. The humour they maintain, the love and even flair for the story telling in parts. The lady who says, “Non!” and then to translate (which I could have done perfectly of course), “I am not being murdered by a man wearing a tracksuit! That's too much!”

There people have been through the worst, the horror, the hatred, the smells of death and witnessing of loved ones die, but they retain their humanity. A love no terrorist will ever have. “You cannot take what's inside me.” as one says They may be unique by ordinary standards, they may be ordinary by everyday standards, I don't know. But November 13 is impeccable documentary making, if a very hard watch. The message which rang loud and clear for me was if you try to blow society apart, life has taught us all you do is strengthen resolve. Attempts to separate so violently makes the fractious segments take hold of one another, as they're spat out of your violence. We're all grasping for a grip on this confusing, human plain, and all hatred, fear and violence does is give everyone else a foothold against you.

Bedsit it? While a small part of me identified with the sense of understanding yet confusion, there is so much in November 13 that my emotions rather got the better of me. Hence this rambling, post. I just found it brilliant, if incredibly reducing, upsetting, conversely warm and bonding film-making. I watched all three in a day, with pauses to sob. 10/10