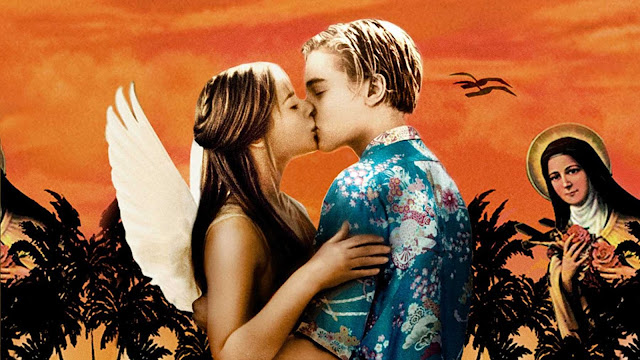 I didn’t see Romeo + Juliet in the cinema. I was thirteen and in my teenage opinion far too manly for that flowery, female stuff. I think I saw The Lost World: Jurassic Park with my dad while my mum and sister saw Romeo + Juliet simultaneously (someone at Purley cinema clearly had a cynical skill for scheduling).

A few weeks later, in a black cab because those existed back then and I was teenage-rich with pocket money and paper round cash, I found a portable CD player with the Romeo + Juliet score in. CDs also existed back then. I mean they still do but only in museums and charity shops. Note score, not soundtrack. Not for a second did I consider handing the player in; the cab was about £10 for a five minute drive. The geezer was rich enough in my eyes*. My find more than paid for itself because there is every chance I’d never have put the film on if not for its music.

Shakespeare was good with words, so it goes, and Baz Luhrmann is awesome with the auditory. Except for that thing about sunscreen. Every film he’s done has had a flair in its music. Even the shit ones.

READ MY PIECE ON ROMANCE FILMS OVER AT WHAT THE FLICK

Not only is this what I would call a great adaptation, perfectly pitched in the zeitgeist of the 90’s, Luhrman’s Romeo + Juliet is also stylishly offbeat and beautiful in a way the teenage me would never admit to enjoying. It is even, contrary to one of my most ardent cinematic edicts, something of a musical. I hate musicals, mostly, but mainly because interrupting the story for a flipping sing-song is best left to Music Hall, i.e. in the past. It was just as bad then, I imagine, but people were poor and desperate which we don’t have anymore in this current utopia.

The music in this film doesn't interrupt the narrative- it sings with it.

You really don’t need me to tell you the plot of Romeo + Juliet, do you. Do you? The cast however, oh man the beautiful, wonderful cast- let me tell you about them. Like the rest of the film the thespian team are eclectic and perfectly so. Of course there’s Leo DiCaprio and Claire Danes, but then you have John Leguizamo, the wonderful and missed Pete Postlethwaite, Harrold Perrineau, Paul Sorvino and even Paul Rudd and M. Emmet Walsh pop up. Selling it as, or rather making, Shakespeare a bonafide mainstream event is not easy, but Romeo + Juliet does it. 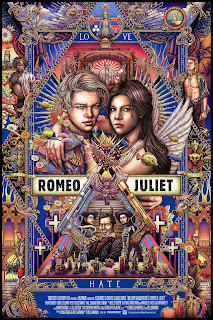 The film, as the play, rewards attention, both making you feel truly smart like you didn't fail English and giving more every watch. I’ve now seen Romeo + Juliet loads and because of that I am way smarter. I maybe lose points this time for taking notes while watching it and I certainly do now trying to decipher the fucking scribbles.

When I first watched the film I wanted to be Thibault. John Leguizamo’s Thibault, anyway. I probably still do, that kind of cool crawls deep into the psyche. He's awesome.

A ripping riposte to any remnants of reverence to languid, stuffy, revered ‘Speare, Luhrmann’s Romeo + Juliet is modern, stylish, fast and still as cool as other 90’s classics. I’d struggle to agree with anyone who thinks it has dated in any other way than that the cast look a bit older now. Baz has even stopped talking about sunscreen. At least publicly.

If you’ve never read or seen any Shakespeare, this film is a great gateway drug. This Romeo + Juliet will pull you in, it’ll quell every query, it’ll entertain and more. This film is a splendid spectacle of the Bard via Baz.

Maybe I’m an old romantic, maybe I’m just tipsy, tired and emotional. Maybe itsh both. I’ll never tell.,,., but I count this in the musicals I like love.

Lurhmann’s supersonic and intricate Romeo + Juliet perfectly captures Shakespeare’s disregard of severity and appreciation for the absurd. It moves me still, it entertains and god damn I LOVE that music. 10/10

*I’m not claiming I wasn’t on the wrong side of a moral issue here; but we can’t change the past.