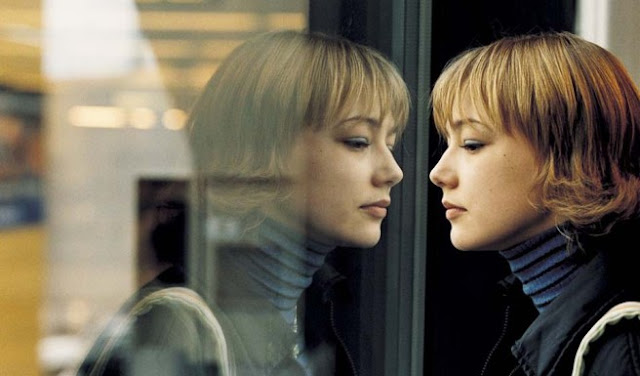 Lilya 4-Ever (2002)
(AKA Lilja 4-Ever)
Spoiler Free
Drama
Rated 18
Swedish auteur Lukas Moodysson’s Lilya 4-Ever I had not seen since it first came out in 2002. The DVD I purchased back in those years when I was adventurous with my film watching has been hidden in my collection ever since. Hidden by an act of commission. I knew one day I’d return to the film, but I had never thought it would take nineteen years for me to gather the strength. There’s a reason it has been so long.

Moodysson is a bit like a Scandinavian Michael Winterbottom in that he will take on whatever genre or project takes his fancy, mix things up and experiment- sometimes to the point of utter confusion. I refer you to A Hole in My Heart for proof of this.

Lilya 4-Ever begins somewhere described as “formerly known as the Soviet Union”. Sixteen year old Lilya (Oksana Akinshina) is about to leave for the USA from the horrifying, abject poverty she inhabits with her mother and what I can only describe as a thick headed, ugly boyfriend. Announcing only the day before that Lilya is not going with them, her odious birth dealer and the pig headed fuck leave Lilya to fend for herself. She has to sink or swim.

Lilya is beautiful, both in person and aesthetically. That’s kind of the point of the film- Lilya is deliberately innocent yet hurt, harmed and thrown away by almost every person in her life, it seems. Except. Lilya’s friendship with Volodya (Artyom Bogucharskiy), a boy a few years her junior who unbelievably has it worse off than Lilya, is the film’s happy place. That happy place is largely sniffing glue though. Their friendship is sincere and there is real beauty there, but it comes from shared suffering. 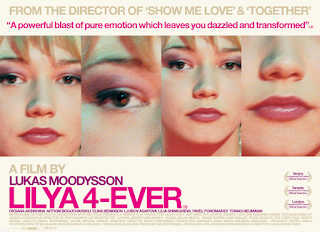 After meeting the charming Andrei, Lilya is besotted and distracted while Volodya is jealous and pretty desperate, given he essentially has nowhere to live. His abusive father kicks the poor boy onto the streets more often than not. Andrei is handsome, attentive, and offers Lilya another life. Her hardship is whether to choose it or not, and knowingly leave Volodya with nobody.

While relentlessly, brutally real, Lilya 4-Ever does have a fantasy element in parts but don’t go chasing unicorns, please stick to the misery and hurt that you’re used to. A lot like Sorry We Missed You, though a better film than it and simultaneously less happy, Lilya 4-Ever shines a light on things we need to confront, not to pretend don’t happen because they don’t happen to us (all). In both style and content Moodysson delivers a brilliant film of beguiling contrast.

You’ll want to cry, but more likely by the end you’ll be shell shocked. You’ll probably cry, too. See Lilya 4-Ever, once.

There is no sentimentality in Lilya 4-Ever, only the slow, bitter realisation that sometimes bad things happen to good people. A brilliant, utterly grim film that you only need to watch once, but that you need to watch once. You can have my DVD if you want. I’m glad I put it on again, just to remind myself I don’t think I can do it a third time, 4-Ever. 10/10