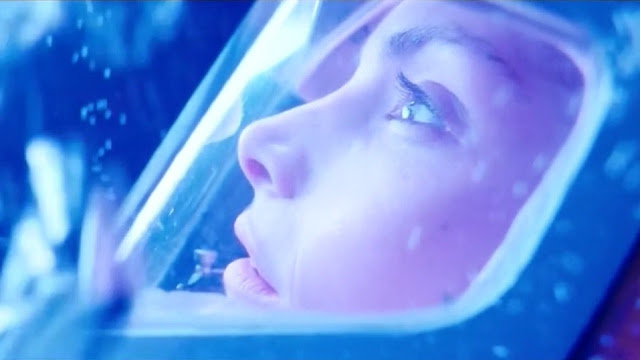 I plumped for the “Special Edition” of The Abyss which has twenty four extra minutes than the two hours and twenty minute original, making it two hours and forty four minutes long because that’s how time works. Having only seen it once, years ago (on a tablet, this was pre Cinema days) I wasn’t really sure what to expect or even much I could recall.

James Cameron is no stranger to the deep- he’s obsessed with it, in fact. The Abyss is almost all set in an underwater rig, leagues below the surface, as a civilian diving team are roped into aiding in the search for survivors on a downed Navy submarine. They are joined, rather against their will, by a team of Marines and the ex wife of their skipper who comes down as a sort of intermediary. There is instant conflict, and in terms of making the film exciting, that is a good thing.

One Marine in particular, with a shit moustache and an even shitter personality, ratchets up the tension by basically being a crazy bastard. Once things start going wrong and weird, mysterious beings haunt the crew, all hell breaks loose on the underwater recovery mission. 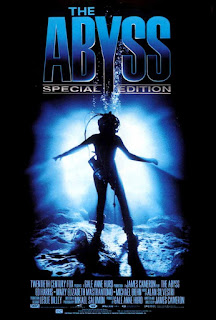 I was reminded at one point of Gravity, only The Abyss is one hundred and sixty four minutes of plot that this was a five minute part of; Gravity is five minutes of plot spread over however long Gravity lasts for. I can’t be naffed to check precisely how long it is because, Gravity, meh. I said in my Young Sherlock Holmes review that it looked fun to make. I’d say the same of The Abyss except that it’s pretty common knowledge that it was an absolute ordeal that even led to Ed Harris punching James Cameron in the face.

The cast and crew may have suffered, but it worked, and as the plot dives ever deeper, despite dating a little, overall The Abyss is jaw dropping to look at. A lot of aquatic action which had me ever so slightly entranced.

Proudly owning nothing offensive or particularly violent or scary, only the idea that some humans are a danger to all life, this is pure excitement. At thirty two years old The Abyss is still a spectacle. A very, very, very strong. 9/10

*I desperately tried to watch and get a review of Titanic out for Valentine’s Day, but I remembered too late it was coming up (not for the first time) so I’ll have to sit on that one and rethink for a bit!