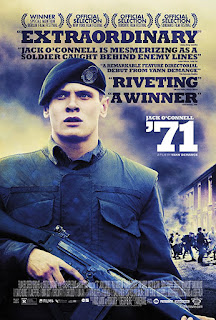 Tagline: “What would you have done if you had been given absolute power of life and death over everybody else in the whole world.”* Not also give it one up the harris while I was killing it? I don't know, I'm not a fan of the Empire.

Premise: A young British soldier is stranded in a Catholic, and therefore somewhat less than pleased to see him, area of Belfast in the 1970's.

Delivery: I'm not touching “the Troubles” with a fucking bargepole, I'm smarter than that. All I'll say is that in no way do I think the British Empire has ever been anything to be proud of; went round the world, killed and stole, generally acted like cunts, then wonder why everyone hates us (bit like the Americans do now). So, perhaps I'm not smarter than that, but '71, the film I'm reviewing, has a feel of realism right from the start. The sincerity of which really helps relax you. Training scenes at the opening are almost like a documentary. That feeling doesn't let up, despite the fairly simple action/ escape plot.

What I can do, for the sake of a film, is empathise with a young soldier thrust into a war he has no real opinion on. That's been the case since professional armies first began and I'm willing to suspend my opinion for the sake of entertainment, given that '71 is evenly handed and believably done. Managed it through every other war film made, so why change because it's close to home? Surely that adds to the belief? Jack O'Connell, Sean Harris and Paul Anderson are all excellent, as to be fair is everyone else, the others are just harder to cross-reference.

O'Connell's character goes out on patrol, and when they are attacked finds himself being violently flushed out by the locals like an unwanted foetus. These days, they'd be able to get an abortion, so both congratulations to the people Ireland, and shame on the system which has prevented it this long. Fucking religion eh? Nothing but troubles. Oh yeah I said I wouldn't go there...

The action is savage, instant and heart thumping. There's no dramatic build up or lingering, verbose deaths. To use army parlance, in '71 people just get slotted. No glamour. There is more than one “oh my (non denominational) God!” scene in this. It is brilliantly shot, a credit to cinematographer Tad Radcliffe, who also did Pride and Jawbone. It must also be mentioned that this was a feature directorial debut for Yann Demange who handles it with tact and conversely utter barbarism. Technically there is little to pick holes in, plot wise it is somewhat simplistic but well executed. So to speak.

Bedsit it? '71 would make a nice, if depressing, double bill with Bloody Sunday or The Wind That Shakes the Barley, which are sabre rattlers no doubt. This is the opposite and for one reason only; the English can't ever make a film about those annoying indigenous Irish. Despite '71 having lost some of the edge, this was my fourth watch and I still enjoyed it. A very solid 7/10