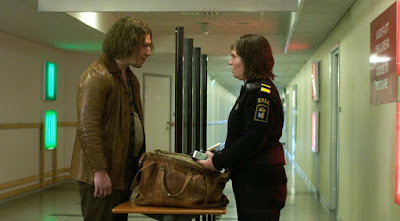 My love of Swedish author John Ajvide Lindqvist is no secret. Let the Right One In is a masterpiece of a film made from a (very good) book. I’ve read many of his works and enjoyed every one. Border is based on a short story from his collection in Let the Old Dreams Die.

By conventional standards, customs officer Tina is ugly to look at. Fell off the beauty tree and hit every branch on the way down ugly. By conventional standards. Tina is also brilliant, she possesses a nose capable of sniffing out all manner of wrongs attempting to pass through her territory; at work or at home. Breaking into a big case with a rotten, horrendous core, Tina simultaneously meets someone who opens her eyes to who she really is.

Much like Let the Right One In, Border is a supernatural tale which feels like it isn’t supernatural. It should, it must, appeal to those worried they’ll encounter wizards and dragons. Nothing so obvious here- there’s much humanity in the characters, much complex depth and mystery. The thrill of the film is uncovering that mystery, so I’ll be careful what I say here. I knew the story going in, but what director/ screenwriter Ali Abbasi and team have achieved is to expand on that text, filling its almost two hours with wonder, drama and love.

Border is a challenge to conventions. Conventional beauty, sure, but identity and genre too. Just because you have been told you are something all your life, that doesn’t mean it is true. The film asks you to see the splendour in its unconventionality, and grips you in the story. It is at once a drama, mystery, crime story and romance. Border straddles all these with a delicate grace, never heavy handed.

I do not say this lightly, you’re unlikely to see a film this unique this year. Border is  beautiful but different, much like its protagonist.

Bedsit it? Go into Border with no knowledge of it other than this wonderful review. Keep an open mind and if you’re my type of person you’ll love it. If you don’t, fret not, you can come back and read more reviews, then try again. I know you’re desperate for my affection. 8/10