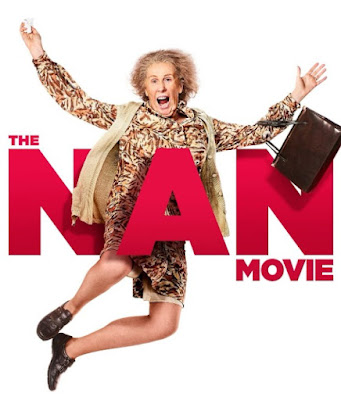 Sometimes I review a film and the cynical, editor part of my brain thinks “this’ll get some hits, big hit, perfect timing”. The Nan Movie is not one of those times. Why am I reviewing The Nan Movie then, you might wonder. Well, it’s because if you don’t try a film how do you know whether you’ll like it and also cynically there will be fewer people doing it and I might have an interesting take on it. Blowing my own trumpet, which despite years of practice I still cannot do, there’s an interesting take home from The Nan Movie which demands you keep reading.

The Nan Movie is a big screen outing for the abrasive, intolerant old lady created by Catherine Tate for her self titled sketch show which ran from 2004-2009. 2009 sounds like a long time between a TV show and its big screen outing and that’s because it is. But. The Nan Movie’s 2022 release is some years after it was actually filmed and I’ll hand you over to the most worrying IMDb Trivia I’ve ever read. 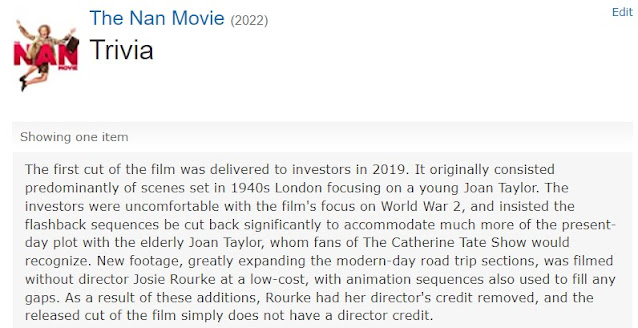 A director removing their credit is basically the filmmaker blowing their own brains out rather than face the consequences of other people's idiocy; like a paediatrician with a hate-mob ready to lynch him outside choosing his own noose. It is sad and alright, as far as I'm aware nobody committed hari-kari because of The Nan Movie.
While it is almost identical to The Bad Education big screen outing, and cringe worthy as hell, I anticipated that. Catherine Tate and Matthew Horne (a Bad Education alumni) do exactly as expected. In parts, dragging a one note, short format sketch character out over a feature length leaves a lot of space for unfunny errors which are duly made. Painfully bad in parts but very funny when it strikes the same chord as its short format embryo, The Nan Movie didn't stink as much as it might have. It still hinges on whether you like the character, though.
Bedsit it?
The cheap laughs are The Nan Movie's best, and yes overall it's crap but I still enjoyed it more than these recent stinkers I've suffered: The Black Phone, Spencer, Jurassic World: Dominion, West Side Story... you get my point. A worryingly out of touch ending lands a 4/10 which represents both how awful the film is and that it did make me laugh. Paradox, innit.
British films aren't all bad! Some are, mind. Check these reviews out...
PRIDE
'71
PLUNKETT & MACLEAN
ATONEMENT
CHILDREN OF MEN
28 DAYS LATER
Labels: Adam Thorn BBC British Catherine Tate Clusterfuck Comedy Elderly Matthew Horne The Nan Movie TV