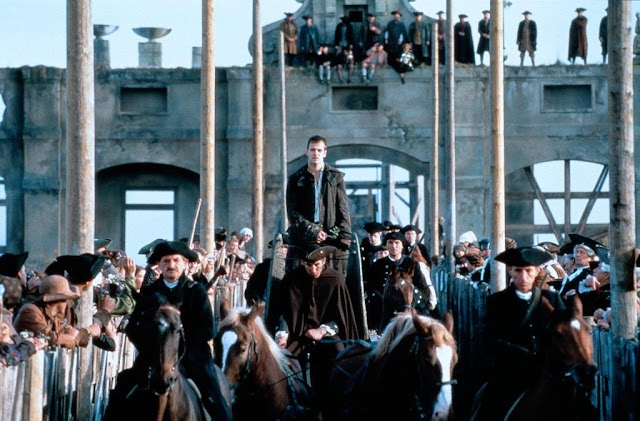 Trainspotting alumni Robert “Rab” Carlyle and Johnny Lee “I used to be married to Angelina Jolie” Miller reunite as highwaymen in the olden times directed by Jake “son of Ridley” Scott. How’s that for succinct?

Ken Stott plays the baddie, a bastard of a copper hell-bent on stopping these polite robbers who don’t do nothing bad except for shag and rob and stuff. Stott is great, but don’t take notice his nose. Once you’ve got that conk in your bonce it’s all you’ll see. Seriously don't think about it at all.

OK that’s really cruel of me because I love Ken Stott, he even played my beloved Tony Hancock and he’s excellently horrible in Plunkett & Macleane. 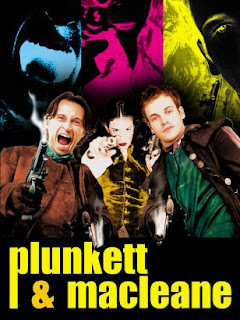 The film is stylised, swishy, swanky and believably unbelievable. Even twenty years on the highly unique take on a period piece remains fun. Scott knows how to frame a shot and mixed with music from the genius John Murphy, Plunkett & Macleane contains one of my favourite scenes from a film ever. Big shout I know but soundtrack and setting come together wonderfully. The moment still gives me the chill of awe.

Funny, dramatic and very much its own beast, Plunkett & Macleane is great escapism.

A wondrous infusion of the contemporary and the classic; Plunkett & Macleane is not perfect but it is daring which I like. It has had twenty years of me loving it and may well be the most solid 8/10 I’ve ever given. There’s true ingenuity in it and I wish Jake Scott didn’t just make music videos now.

*Prizes for spotting Robert Webb**
**Ha! Like I can give prizes