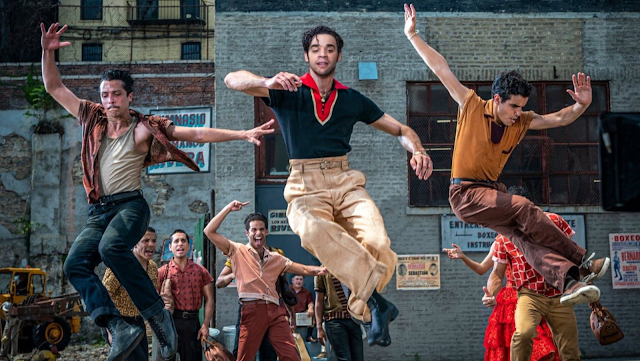 Musical
Rated 12
Disney +
Spoiler Free
Despite West Side Story being a musical I carried into it a soupcon of optimism. As a kid, my parents had the soundtrack and repeated, unavoidable playings of it weaseled their way into my burgeoning grey matter. Also, because I was only a nipper, not a curmudgeonly, closed minded cynic with a lust for gore, I reasoned that the music would be hard wired into what remains of my bright eyed, pre-pubescent personhood. This is Spielberg too, after all- I’d struggle to hate it.

The reason I often fall out with musicals is they engage me with their story then ruin it by breaking into spontaneous, smug singsong. West Side Story cleverly avoided this by immediately doing so, meaning I didn't waste any time identifying (or engaging with) a plot.

There’s a gang of rough, tough street kids, who instantly undermine any pretence of threat by prancing around in unison like prats. Another “gang” shows up and a fracas sets to, where paint tins and comedy metal bins are thrown; there are even people tripping over watermelons and wee-wah police cars screeching up. Is this really an Oscar contender/winner, because it plays out like a fucking live action Looney Toons.

Sufferin' succotash, none of these hooligans look like they’ll end up killing one another; West Side Story feels far more likely to end up in a big, naked, undulating, sweaty pile-up. I toyed with skipping directly to the end for the money shot. Kablam! Right on the kisser, that’s what we want to see. It’s laughable.

“Tony, you were half a step behind on the chassé, What the fuck is wrong with you? Do you want to get killed man! You’ll get eaten alive in dance prison, I hear Louie Spence is running things inside now, he’ll make you his bitch.” 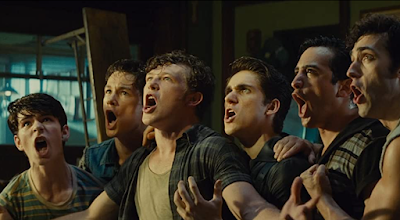 West Side Story carries a warning for featuring smoking, but the characters manage to make smoking look so uncool the film should be commended for services to public health. Put a picture of them on a packet of fags to put people off; fuck lung cancer, I don’t want to be that guy!

I have an arbitrary rule where I have to have seen at least half an hour of a film before I can review it. Full disclosure, I persevered until 33:07. Let me be brutally honest here, I only have one life and the remaining two hours would be a waste of what diminishing time I have left in the mortal realm. I want to throw away those two hours differently- there are pigeons to shout at.

It’s probably really good if you like these things, West Side Story. I do not like these things and I think it may just be time to call it for me on this front. If you had childhood memories of liking West Side Story, cherish them through rose tinted glasses because adult me now wants to scream “no, little Adam, you’re a fucking moron!”.

Or is it adult Adam who’s a moron for trying to watch West Side Story in the first place?

With what is possibly my most pointless score ever, West Side Story gets an N/A (never again).