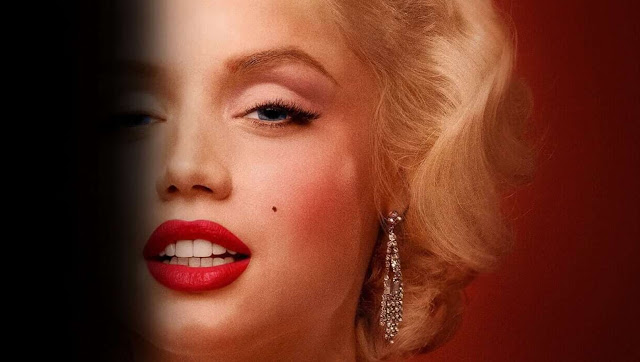 Blonde appealed to me because I’m a fan of Andrew Dominik’s films- particularly The Assassination of Jesse James by the Coward Robert Ford, though Killing Them Softly is underrated in my opinion. I’m not even close to being a Marilyn Monroe fan, mainly because she was before my time and je ne sais quoi. Having seen the recent Netflix documentary The Mystery of Marilyn Monroe, and being an avid true crime podcast listener, I was aware her life was a paradoxical mix of heady Hollywood fame and all the vile things life could throw at a young woman; including fame.

Very, very quickly I realised that Blonde is not a good Friday-night-with-the-girlfriend film. It stamps itself as an upsetting piece of cinema immediately, and we turned it off. I know for a fact my girlfriend will never go near it again, however I’m a glutton for punishment and I love to hate things so I returned alone, some days later.

Lily Fisher, playing the little Norma Jean, does excellently, and by excellently I mean make me want to cry. Which is entirely what she’s there to do. As a biography Blonde does like to bathe in Monroe’s presence, and Ana de Armas is pretty handy at filling the frame with a kind of captivating sense of absence. The 4:3 aspect ratio doesn’t make me think uber-cool arty film, though, it makes me think A Ghost Story, an uber-cool arty film that smelled a little of farts. Someone else’s farts. It’s rare I’m too repulsed by my own and sometimes my intestines’ ability to shock me makes me rather proud.

Blonde is relentless misery, and not in a fun way like a war film. With all the sexual assaults,  which is a lot, I had to ask myself whether I was finding it hard because as a man, watching close to the bone coerced sex makes me feel like I’m not entirely free of guilt. We all (men) need to think about how we are in sexual situations. Or was it because it’s excruciating and horrible to watch on screen? Answer: both. 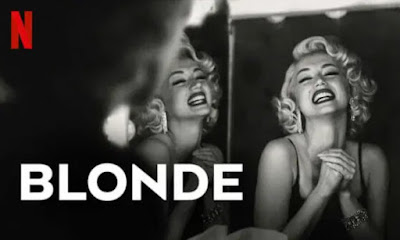 While Blonde frames the iconic images and moments of Marilyn Monroe’s life in Norma Jean’s sadness and horror, I struggled to identify any coherent narrative structure to it. Or perhaps I was just blinded by a deep desire to only be bored rather than bored and (blonde bomb) shell shocked. Just like Fart Story, Blonde tries to be ephemeral and timeless. I suppose when you know people have to suffer almost three hours of your crap it might work to try and trick them into thinking it’s art. Art, rather than a fart.

Every time I paused Blonde, which was a lot because it isn’t on at the cinema and fuck that I need to wee, I couldn’t believe how long was still left. This being streaming, I wondered if just leaving it playing while I went to the loo might help move the whole shegangbang along. These are not conducive thoughts to a positive review. Somehow that didn’t feel honest, especially when I’d only grass myself up in my own review for lying. You charlatan, Adam. Ugh.

If Blonde is anything to believe Monroe had a fragmented reality and a fractured soul. It plays as vignettes of her life as if they flashed before Marylin’s eyes as she died. I really hope her existence was more pleasant than this film portrays. Blonde made me sorry for Monroe and everyone else who has sat through the film.

I’m sure Norma Jean/ Marilyn Monroe must have had some happy moments in her life, but none of them are in this film. It’s hard to argue that Blonde looks bad and for some people its jerky, stylised narrative might really do it, provided they don’t mind the relentless misery, too. Not for me, though. Not for almost three hours of disconnected human awfulness. 4/10