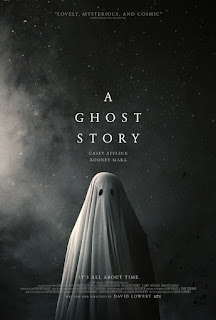 Tagline: “It's all about time.” That's doubled the screenplay word count.

Premise: Casey Affleck (boo) dies in a car accident and the ghost of his character “C” (they didn't even bother with writing full names) stalks the house he and his wife “M” shared, wearing a sheet with cut out out eye holes, so that you know it's a ghost but don't have to look at Casey Affleck's face.

Execution: I was super excited about seeing A Ghost Story. I knew it'd be a bit arty, possibly quite slow, but was fine with that. The Guardian, who's film section I insist on continuing to read despite constant evidence that they're pretentious arseholes, called it “a poem on loss” and I'm a sucker for a sad film. I wasn't sure it could go wrong, but it really did. The first thing to irk me was the aspect ratio, shot in some kind of novelty Instagram filter, in my notes I wrote “maybe it will go away?”. Just like C's ghost, it doesn't.

A Ghost Story is a film about loss, but from the perspective of the dead. In that and many other respects it's quite brave, but one of the major difficulties in film making and writing is making the audience connect with the characters. A silent man in a sheet watching life happen around him, not interacting with the environment at all (save one poltergeist-strop) is really hard to like, and those left living don't speak enough or hang around in any meaningful way to really care for. I know that's all part if what the film is trying to say about the nature of death, I just found it hard to engage with.

There was one moment of genuine emotional resonance for me, but it was about seventy minutes in and not enough to rescue the film. Writer/ Director David Lowery definitely has some good ideas, and I might be being harsh on A Ghost Story, because I was so looking forward to it. Maybe I'll rewatch it in a few years with new eyes and different expectations and see a beauty in it I missed this time. But here's the thing which kept bothering me, if you're sold on the idea of eternal utopia, why would you settle for the ceaseless monotony this film depicts? What kind of message is that, where's the story?

“I'm going to write a film about the afterlife where it depicts how long and nothingy eternity is, watching time pass you by, unable to influence it. There'll be hardly any dialogue and no coherent story arch to really hit the point home.”


Bedsit it? A Ghost Story is definitely a film which is very subjective. You might dig it, deeply. You might not. I had hoped I might, and I certainly can see what Lowery wants to do. At the same time even as someone who wanted it to resonate with, who has reason to engage with it, I did only fleetingly. 5/10
Labels: A Ghost Story Bedsit Bedsit Cinema Bereavement Casey Affleck David Lowery Death Drama Film review Loss Romance Rooney Mara Writing