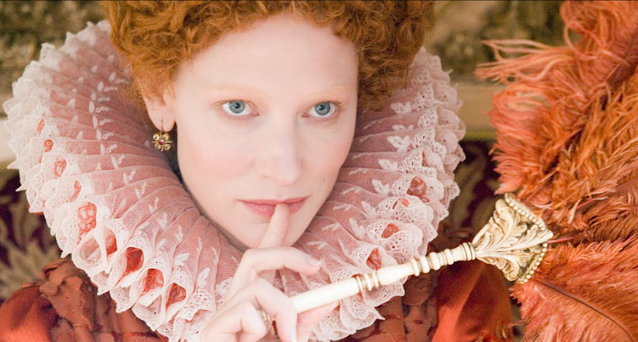 As a young and beautiful, newly crowned Queen, Elizabeth is courted by pretty much every creep in Europe wanting her body and her power by proxy. Shekhar Kapur’s film follows Cate Blanchett’s famous English Monarch from her last days as an ostracised Princess through her rise as a free thinking, political power holding her throne against all rivals of religious, malicious prejudice and more.

There is such scope to the plot, plots and sub plots that trying to describe them in detail would be foolhardy. Besides, the film does it so well. Elizabeth is presented like a painting, beautiful and perfectly posed; everything where it should be in each well designed frame. The visuals aren't its only intricacy, the world class scheming which follows the Queen around, threatening to end her and in places helping to prevent that is engrossing. I almost used melodrama but that'd be cheapening this film.

The obsession with Elizabeth’s love life is interesting. By obsession I mean in the film by the characters. Her suitors are largely toe curling, except for one- Joseph Fiennes’ Robert Dudley. Elizabeth likes him and there are some nice moments, and some odd portrayals of what love might have looked like in such uptight times. I appreciate intimacy is sometimes hard to portray and preferences change but how is hand wiping sexy? He might as well pick her nose for her. Then eat it like a reverse swallow, Dudley ain't no spitter. 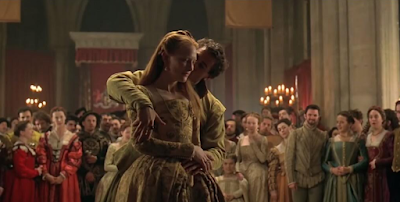 To catch so many future stars so early on is a lovely bit of work. Great job, ladies. There isn’t a bad performance, but Kathy Burke’s Queen Mary Tudor is rather brilliantly un-regal. Geoffrey Rush’s Sir Francis Walsingham is superbly slimy, is he an ally or a wolf in sheep’s clothing? Blanchett's Queen slowly realises the reality of her reign and adapts with pomp.

The film looks the part, both beautiful and grimly 1500’s. I did wonder though, why do all their books still look old. Surely some of them were new back then? A digression. Elizabeth is a real spectacle, so comfortable in its skin as to be swaggering, grandiose and almost pompous. I have to say I gushed over it. Elizabeth is sumptuous cinema.

Is the history completely accurate? Probably not. Do you really care when a film is this engrossing and well made? So much better than I remembered, Elizabeth totally seduced me; I was completely absorbed. 10/10