A mysterious offering which snuck up on me, Sideworld: Terrors of the Sea is, in crude, box-checking terms, a documentary with a horror slant. I’d be interested to know if something as formulaic as that is what its makers intended. I’ll bet it is not. Here be beasties as tales of nautical ghosts, curses and mermaids are told with a devotion to an ephemeral style.

Terrors of the Sea is a companion to Rubicon Films’ Sideworld: Haunted Forests of England. The burgeoning production house has also made two non-fiction feature films, Hex and The Droving, and director George Popov chairs and narrates the Sideworld duo. Now, fiction: what is and isn’t fiction and how much do you care? Terrors of the Sea could be subtitled “things drunk sailors claim” and while that’s fine, seamen have a saltier way with words than this film could hope to transmit in this format. 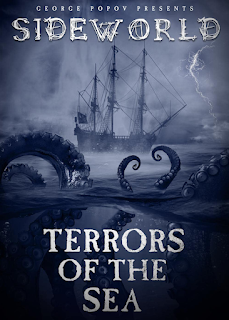 Sideworld: Terrors of the Sea is imagery with words laid over the top, my notes read, but even I then scribbled “what film isn’t images with words?!”. So, y’know. There are some striking shots of relevant seascapes, with stories transposed and in places text (which really felt like a deliberate but unnecessary visual difference). The fables are simply read out, and that was a bit of an issue for me. A series of short sea-scares, while each singularly works in the format, doesn’t have anything anchoring you to it over a feature length time. It is easy for one's attention to drift off.
What Sideworld: Terrors of the Sea does well is look great, and it’s a shame the film can’t build on that and really lose you within its atmosphere. It falls on that sword somewhat because it cannot immerse completely. That said, I’ve seen nothing like it for a while, and the only thing I can compare it to is the iconic Wisconsin Death Trip.
Bedsit it?

I like what they’re trying to do with the series (assuming Sideworld: Haunted Forests of England is the same style) and would definitely watch another in the hope that it builds on this. It’s a film with niche appeal, which within that will probably really work for a select few, just not me so much. 5/10

AHHHHHH THE SEA! Them waves and all that deep. Scary, cinematic shit. Someone should make a film about it. Check these reviews out!...
LAST BREATH
AQUAMAN
THE MEG
300: RISE OF AN EMPIRE
THE LIGHT BETWEEN OCEANS
Labels: Adam Thorn Deep sea Documentary Drunk seam George Popov Ghosts Horror Independent Legend Rubicon Films Sailors Sea Sideworld Terrors of the Sea